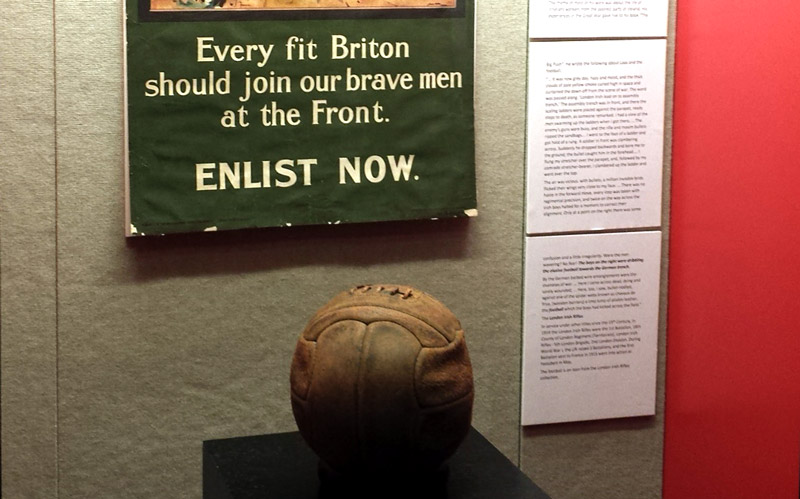 Temporarily on display in the Main Gallery, the Loos Football is on loan from the collections of the London Irish Rifles Association.

The football (soccer ball) holds a special place in World War I history. The Battle of Loos was the largest British attack of 1915, during which the 1st Battalion of the London Irish Rifles (LIR), a volunteer rifle regiment of the British Army, distinguished themselves. Their successful attack and subsequent defense of their position earned the LIR their second battle honor — “Loos, 1915.”

While storming across no man’s land to capture the enemy trenches, Sgt. Frank Edwards, the captain of the Rifles’ football team, kicked a football along in front of the troops. It is this football which currently resides at the Museum.

Poet Patrick MacGill, who was a stretcher-bearer in the British Army during World War I, wrote of the Battle of Loos:

“It was now grey day, hazy and moist, and the thick clouds of pale yellow smoke curled high in space and curtained the dawn off from the scene of war. The word was passed along. ‘London Irish lead on to assembly trench.’ The assembly trench was in front, and there the scaling ladders were placed against the parapet, ready steps to death, as someone remarked. I had a view of the men swarming up the ladders when I got there, their bayonets held in steady hands, and at a little distance off a football swinging by its whang from a bayonet standard. … I flung my stretcher over the parapet, and, followed by my comrade stretcher-bearer, I clambered up the ladder and went over the top.   …

“The air was vicious with bullets; a million invisible birds flicked their wings very close to my face. Ahead the clouds of smoke, sluggish low-lying fog, and fumes of bursting shells, thick in volume, receded towards the German trenches, and formed a striking background for the soldiers who were marching up a low slope towards the enemy's parapet, which the smoke still hid from view. There was no haste in the forward move, every step was taken with regimental precision, and twice on the way across the Irish boys halted for a moment to correct their alignment. Only at a point on the right there was some confusion and a little irregularity. Were the men wavering? No fear! The boys on the right were dribbling the elusive football towards the German trench.   …

“By the German barbed wire entanglements were the shambles of war. … The Irish were now met with harrying rifle fire, deadly petrol bombs and hand grenades. Here I came across dead, dying and sorely wounded; lives maimed and finished … Here, too, I saw, bullet-riddled, against one the spider webs known as chevaux de fries [Frisian horses, a type of wooden barrier], a limp lump of pliable leather, the football which the boys had kicked across the field.”

The Loos Football is also featured in the special exhibition, Fields of Battle, Lands of Peace: The Doughboys, 1917-1918, currently on view in the Museum’s outdoor Memorial Courtyard. Showcasing contemporary photographs of World War I battlefields by Michael St Maur Sheil, the football was photographed on the same fields it was kicked across a hundred years before. 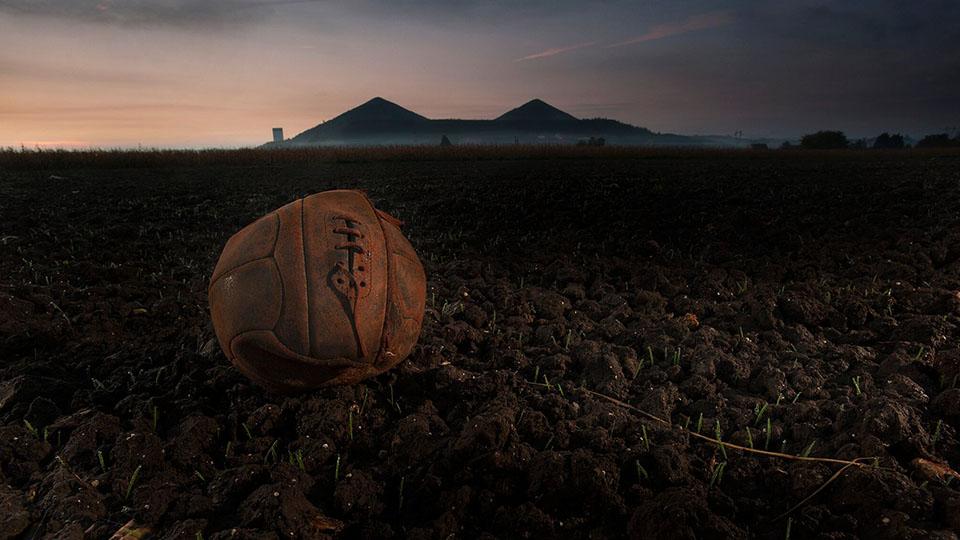