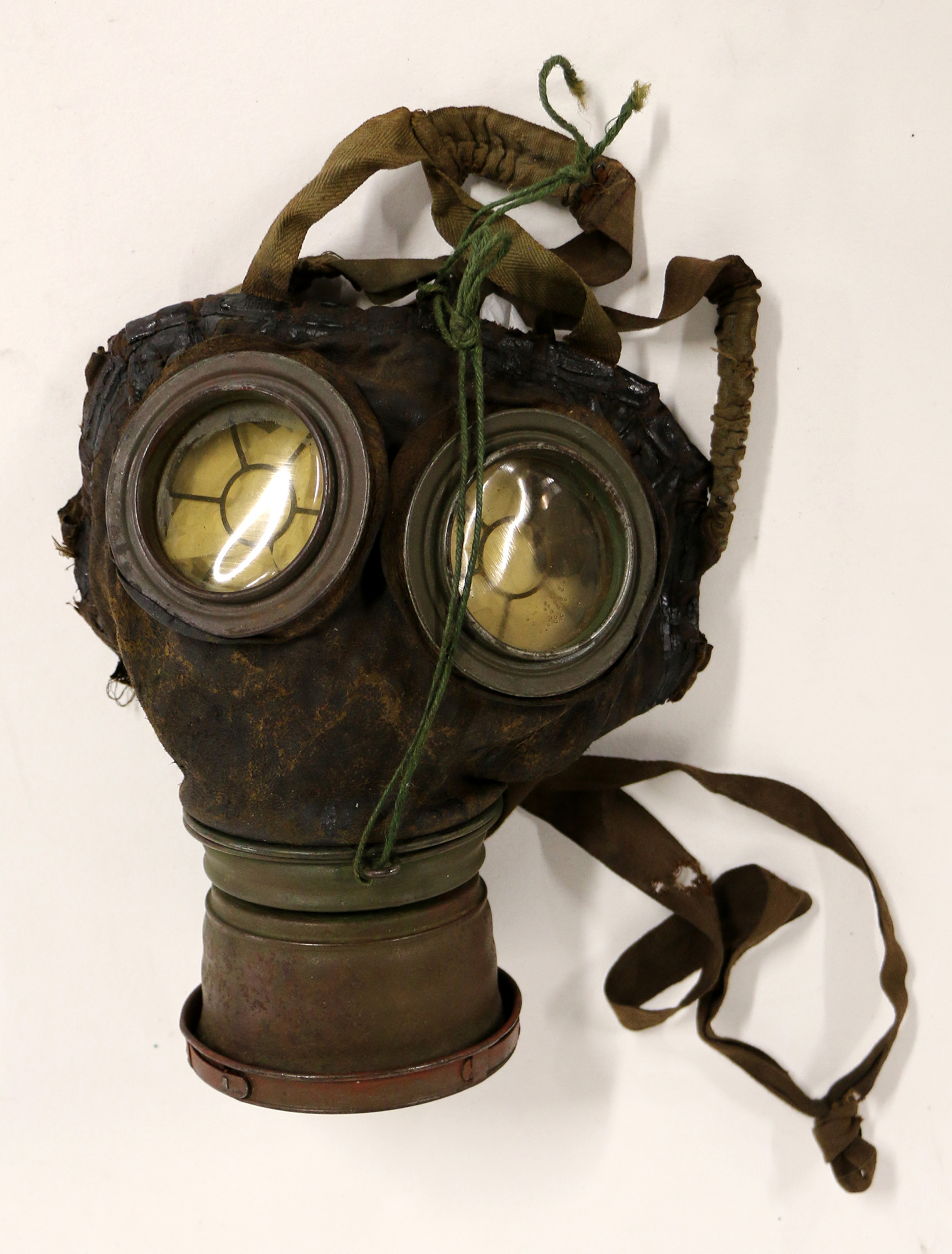 This mask is oiled leather pattern with screw-on filter and filter cap (chemicals removed from filter). The eyepieces on the one in the Museum’s collection are clear and intact, unlike many which have been damaged through wear and age. Paul Bäumer and his comrades in the movie endure heavy shelling followed by a mustard gas attack, using a mask like this one for protection.

Learn more about the first usage of poison gas in WWI 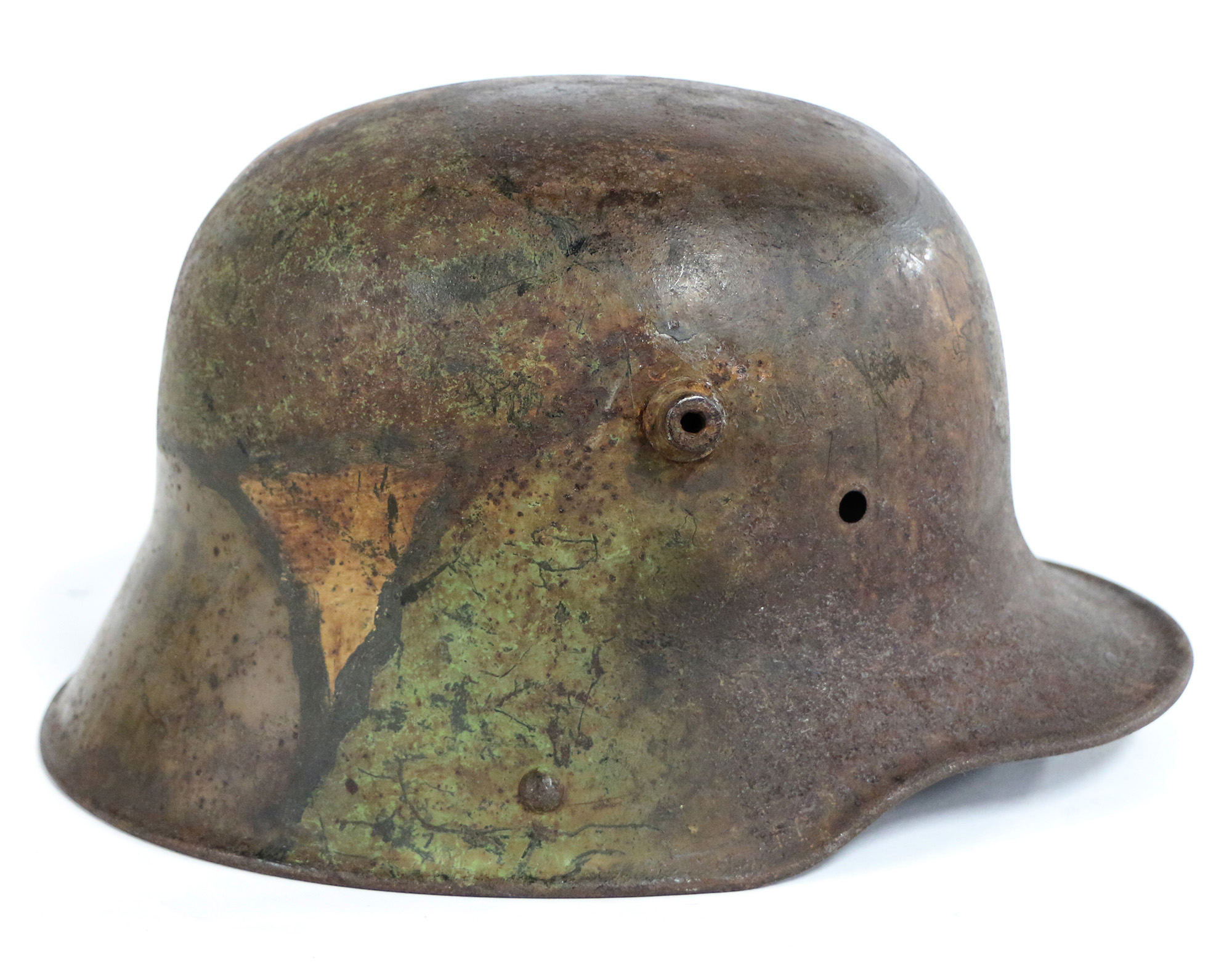 “At school nobody ever taught us how to light a cigarette in a storm of rain, nor how a fire could be made with wet wood – nor that it is best to stick a bayonet in the belly because there it doesn't get jammed, as it does in the ribs.”

This helmet (known in German as a Stalhelm) is made of steel – this one is a Model 1916. At the beginning of the war, the common German infantryman still retained equipment and traditions from decades before. As the war progressed, many innovative changes occurred in the German infantryman’s equipment and uniform. Steel helmets replaced leather. Body armor, trench clubs, hand grenades, knives for close combat, and even submachine guns were used on the battlefield.

Learn about life for German soldiers in our 2010 exhibition, Man and Machine 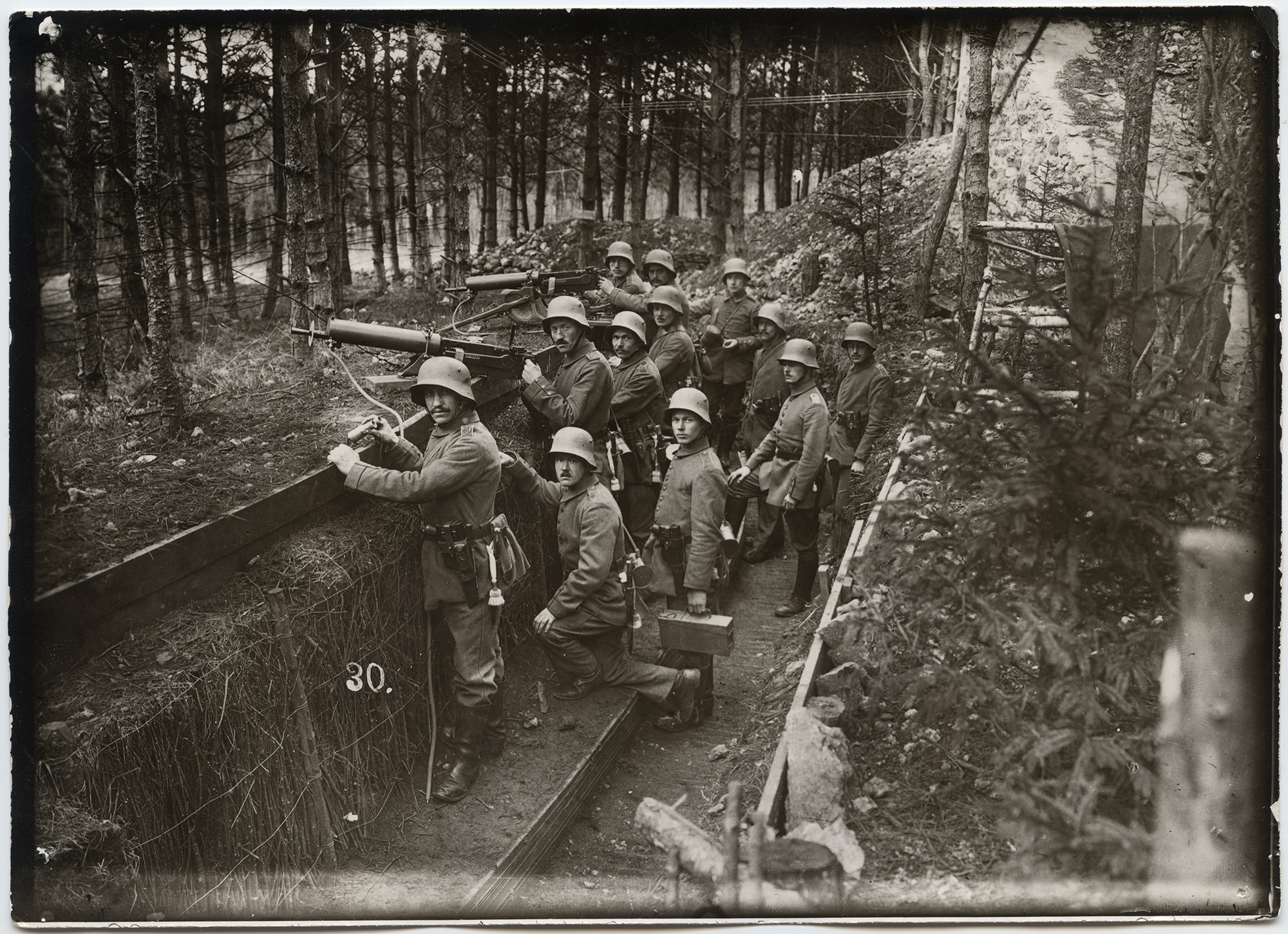 “The war has ruined us for everything.”

Look closely at this German trench, occupied by soldiers with German MG08 machine guns. Although conditions varied, trenches were often muddy and infested with rats and bugs, keeping soldiers from sleep – and from shelter. Even a brief time in the trenches could leave men weary. Paul and his fellow soldiers spend time waiting in the trenches – waiting for food, waiting for the fight, and as time goes on, waiting to die. 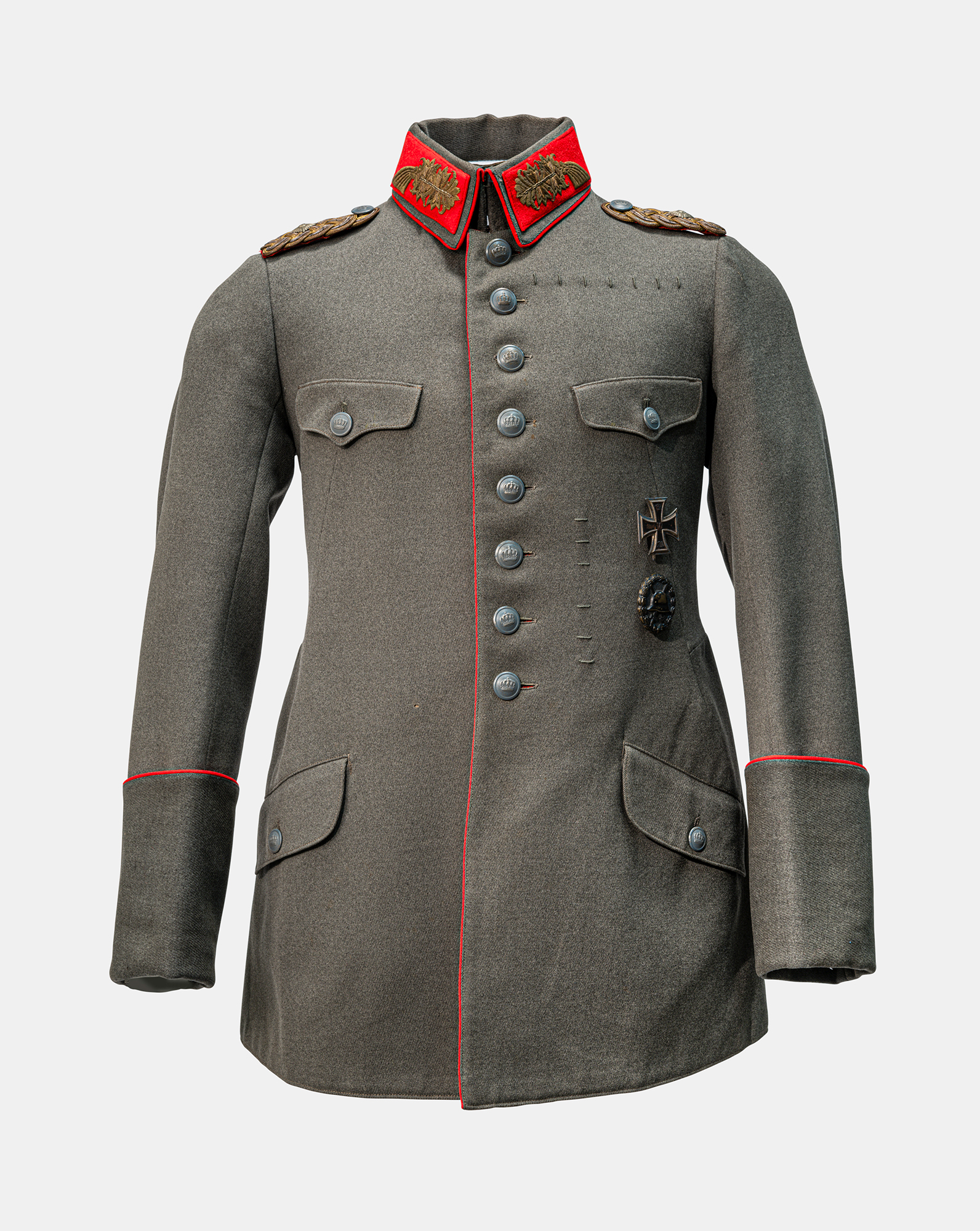 “If you give a man a little bit of authority he behaves just the same way, he snaps at it too...the army is based on that; one man must always have power over the other.”

This is a field tunic identified on an interior tag to Lieutenant General Theodor Teetzmann (M1910 for General der Infantrie). It has field shoulder pieces for a Lieutenant General. The thread ribbons for medals are numerous, but the only medals present are the Iron Cross 1st Class and the wound badge. In the book, when Paul is home on leave, he is reprimanded for not saluting an officer he passes in the street – an absurd gesture after experiencing the horrors of the front lines.

See more uniforms on view now in our main galleries. Plan your visit 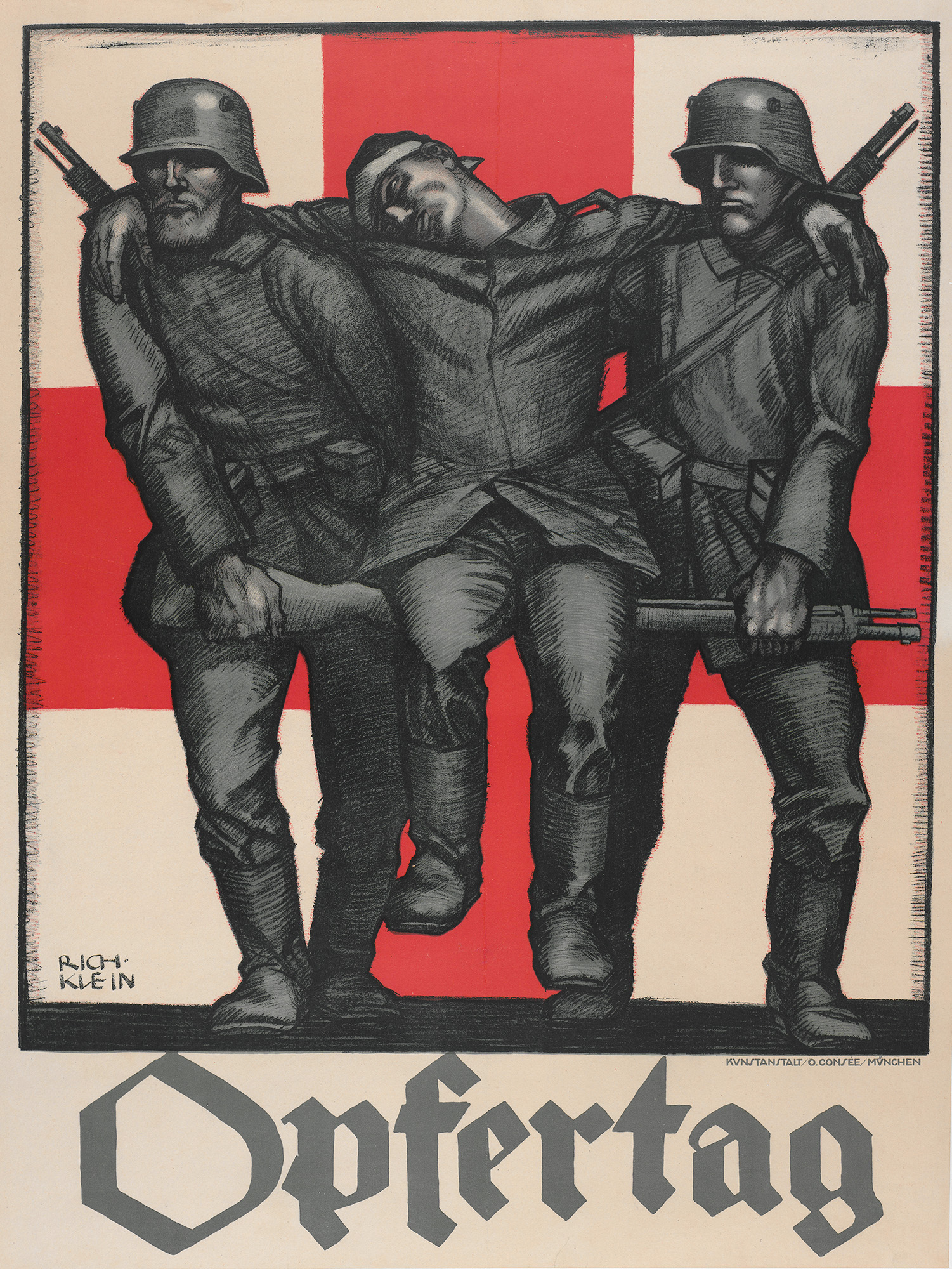 This poster is by artist Rich Klein and titled, “Offering Day 1918 - Red Cross.” In World War I, the poster, previously the successful medium of commercial advertising, was recognized as a means of spreading national propaganda with near unlimited possibilities. Its value was increasingly appreciated; the poster could impress an idea quickly, vividly and lastingly. Paul starts his journey as a soldier buoyed by the promise of adventure and glory for his country – and grows increasingly disillusioned with war as his comrades become casualties of the conflict.