and the Birth of the Modern American Army
Image

Indelibly tied to Americans, “Doughboys” became the most enduring nickname for the troops of General John Pershing’s American Expeditionary Forces, who traversed the Atlantic to join war weary Allied armies fighting on the Western Front in World War I.

The Great War marked the first time in history the United States sent soldiers abroad to defend foreign soil. The French ecstatically welcomed the first wave of soldiers. “Vive l'Amèrique!” came the shouts at the edge of a Boulogne pier as Pershing steamed into port. In an emotional arrival ceremony at the Marquis de Lafayette’s tomb, Col. Charles E. Stanton declared to the crowd, “Lafayette, we are here!” suggesting Americans had come to repay an old debt to the French dating back to when the colonies stood virtually alone in the American Revolution.

But what to call the Americans? “Yanks,” “Sammies,” “Pershing’s Crusaders” – these were just some of the names used to label America’s enlisted men in World War I. Pershing’s Crusaders and Sammies (for Uncle Sam’s troops) made some appearances in advertising and propaganda posters, but those labels weren’t well liked by the troops, many of whom preferred to be called Yanks.

Though there are many origin stories for “Doughboys,” the nickname that finally stuck, there is one with strong historic support. Likely, the name attached early to the Americans from U.S. military operations on the Mexican border.

Reconciliation with Mexico had just concluded in 1916 when marching foot soldiers in Pershing’s Expeditionary Force traveled south of the border to fight rebel Pancho Villa. Covered in white adobe dust, the foot soldiers were called “adobes” or “dobies” by mounted troops. Within a few months, these dobies, or Doughboys, were redeployed to Europe. 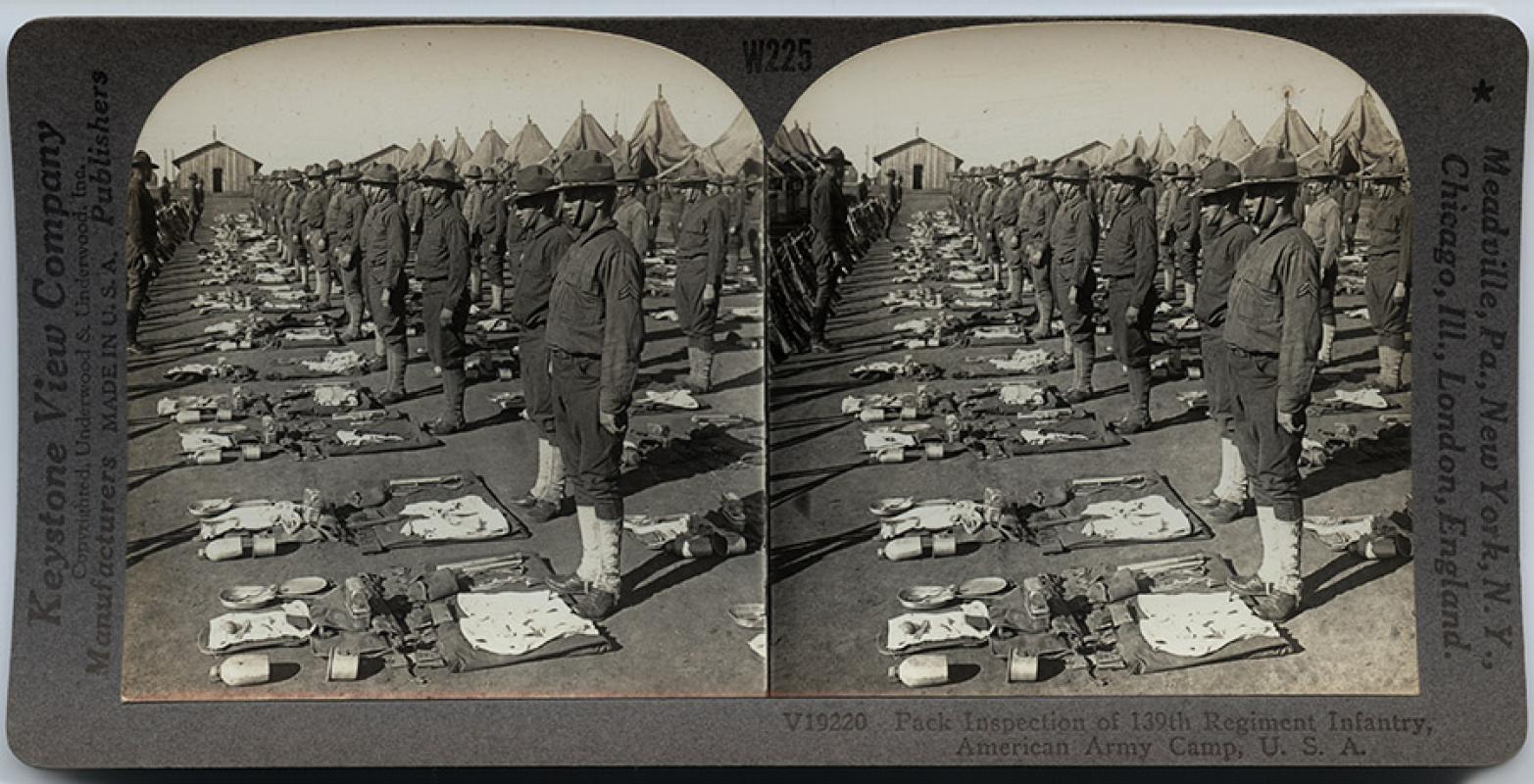 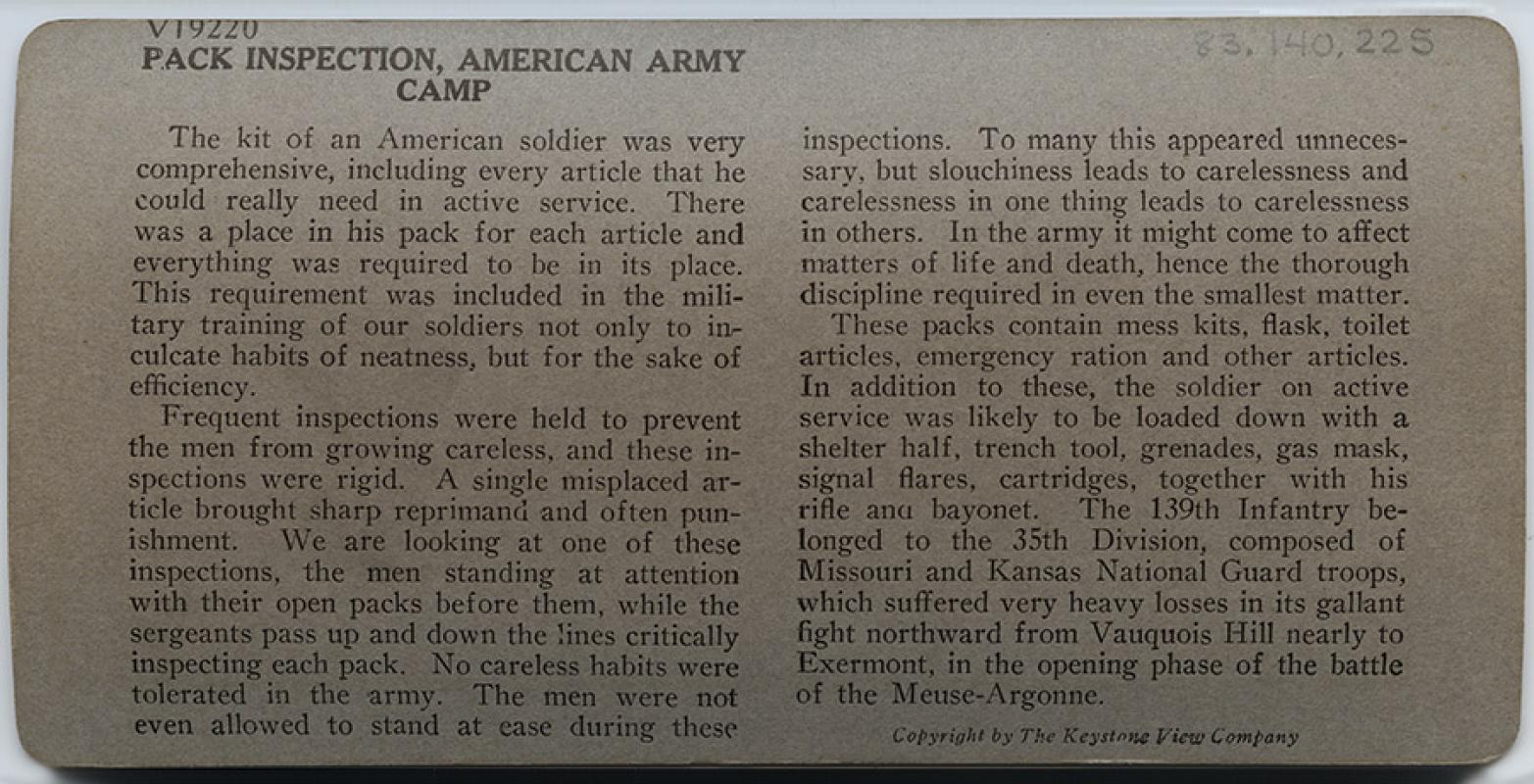 Whatever name they were called, few disagreed that the U.S. made a huge impact on the war by just entering the fray. The enormous effort required to mobilize and equip the two million servicemen in the span of less than a year was nothing short of inspiring.

With this pivotal historic event – the modern American Army was born in WWI. Approximately four million men would end up serving in the U.S. Armed Forces from April 6, 1917 – November 11, 1918. 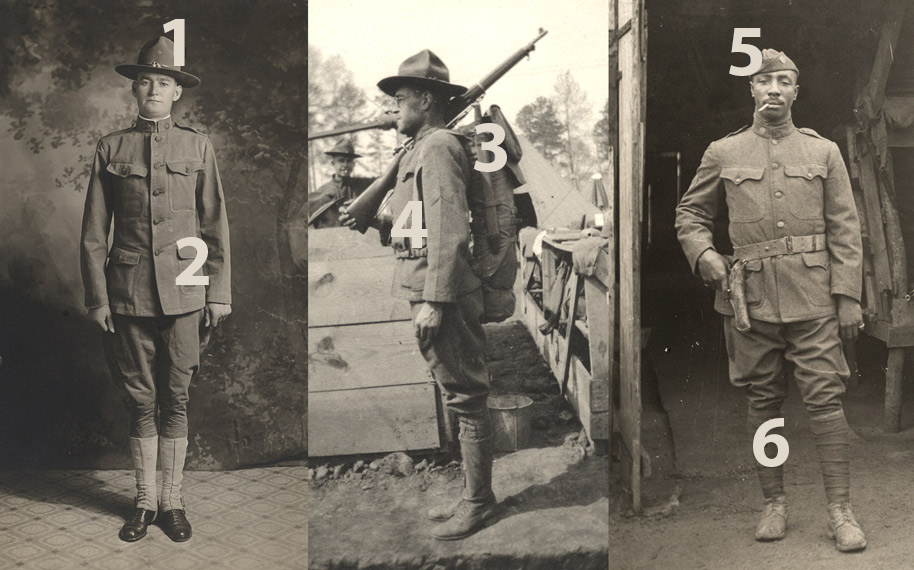 (1) Campaign Hat: The Doughboy's hat at the beginning of the war was the campaign hat, also known as a “Montana Peak” or Sombrero. Made of wool felt, the campaign hat had a leather chin strap. Later in the war, it was replaced by the overseas cap. Scroll over the image of the soldier at the right for more information on the cap.

(2) Uniform: A Doughboy's uniform consisted of socks, long underwear, a pullover shirt, breeches or trousers, and a tunic with high collar at the neck. This uniform could be made of cotton, as pictured here, or wool, as seen in the two soldiers to the right.

A clean and orderly presentation was important. When not in active field service, soldiers were ordered to keep their uniforms pressed and brushed, and their boots and belts polished and cleaned.

(3) Pack: In their pack, soldiers were supposed to carry a mess kit, toiletries, extra socks and long johns, tent pieces, emergency rations, an entrenching tool such as a spade, and many other items.

(4) Ammunition Belt: The Doughboy's ammunition belt carried 10 pockets, each with 10 rounds of rifle ammunition. Also hung from the belt would be a canteen, cup and carrier, a first aid kit and a trench knife.

(5) Overseas Cap: Cheaper, easier to pack in their equipment, and more in the fashion of other Allies' uniforms, the Overseas Cap began to replace the Campaign Hat (on the soldier at left) later in the war. Many soldiers did not like when this headwear would gap at the top, and would fasten them with safety pins.

(6) Puttee (put-tee): When the Doughboys first began preparations in the U.S. they wore canvas leggings, but those who went “over there” wore wool spiral wrap puttees. Eventually all infantrymen adopted the style.

Puttees, an East Indian term, were made of wool and tightly wrapped around the legs from the ankles to the knees. Worn outside of the soldier’s pants, puttees were originally believed to increase muscle stamina, but the best contribution they offered was an extra layer of protection against mud.

Learn more about how the U.S. built a military machine.