“Ultimately, a generous collection can be accumulated from the undoubtedly huge aggregate of interesting relics now in private ownership throughout the country… So one hundred years from now such letters, documents or objects will add to the value and interest of the collection.”

That National WWI Museum and Memorial started amassing objects and documents from the First World War in 1920 and has continually addressed these questions ever since.

A common assertion among historians is that “art and war are old companions.” Jules Andre Smith, one of eight official war artists of the American Expeditionary Forces (AEF), wrote: “When war poses for its picture it will sit with hands folded for those who wish it to, or it will strut with clanking sword, or pose as a mother of mercy, or the invading barbarian, or the valiant hero, or the cringing coward, or better yet, a composite of all of these enveloped in a fury of sound and sight and horror.”

Though the Museum and Memorial has focused on World War I material culture since the establishment of the collection, it has amassed significant works of art from around the globe. Percy Moran, nephew of famed landscape artist Thomas Moran, created a work in 1923 of General John J. Pershing at the Tomb of Lafayette. This visit, on July 4, 1917, soon after the first Americans arrived in Paris, was to honor Lafayette’s gallant assistance in the American Revolution.

A striking piece from an unknown artist in 1915 was done after the sinking of the Lusitania on May 7, 1915. The watercolor shows Uncle Sam with a black eye and cuts, but rolling up his sleeves ready for a fight. The model was reportedly U.S. Senator James A. Reed from Missouri.

Additionally, Memory Hall itself boasts monumental works. The mural at the east end by noted muralist and illustrator Jules Guerin, In Memoriam, 1914 – 1918, was in place when the Museum and Memorial opened to the public in 1926 as were the painted battle maps by famed muralist and painter D. Putnam Brinley. The other murals, Liberty Memorial Site Dedication, American Women in Service and the Blue and Gold Star Mothers were created by Kansas City artist Daniel MacMorris, who was also responsible for the acquisition and reconfiguration of the Panthéon de la Guerre. Art and war are indeed old companions. 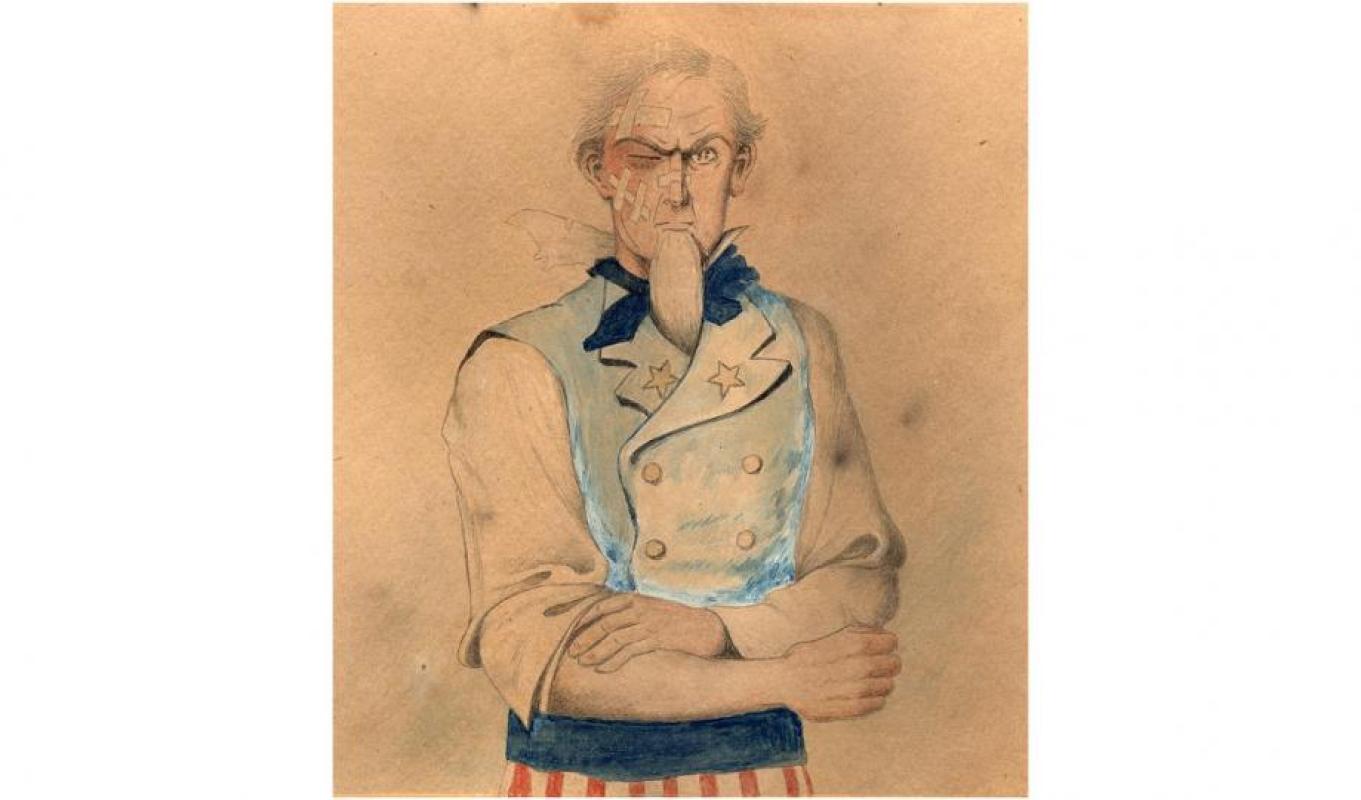 Watercolor on board, “World’s Heavyweight Champion,” 1915, artist unknown. The piece was done after the sinking of the Lusitania, May 7, 1915, showing Uncle Sam with a black eye and cuts, but rolling up his sleeves ready for a fight. 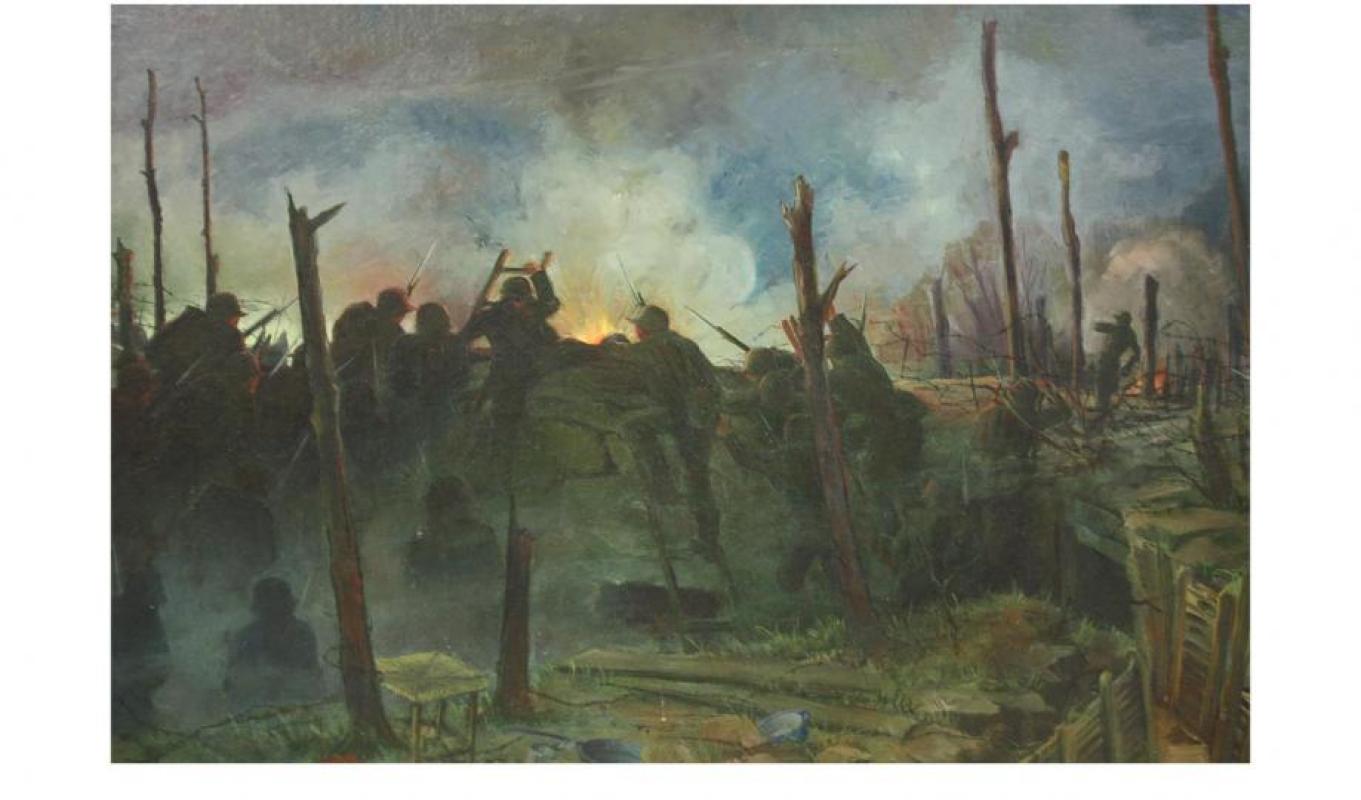 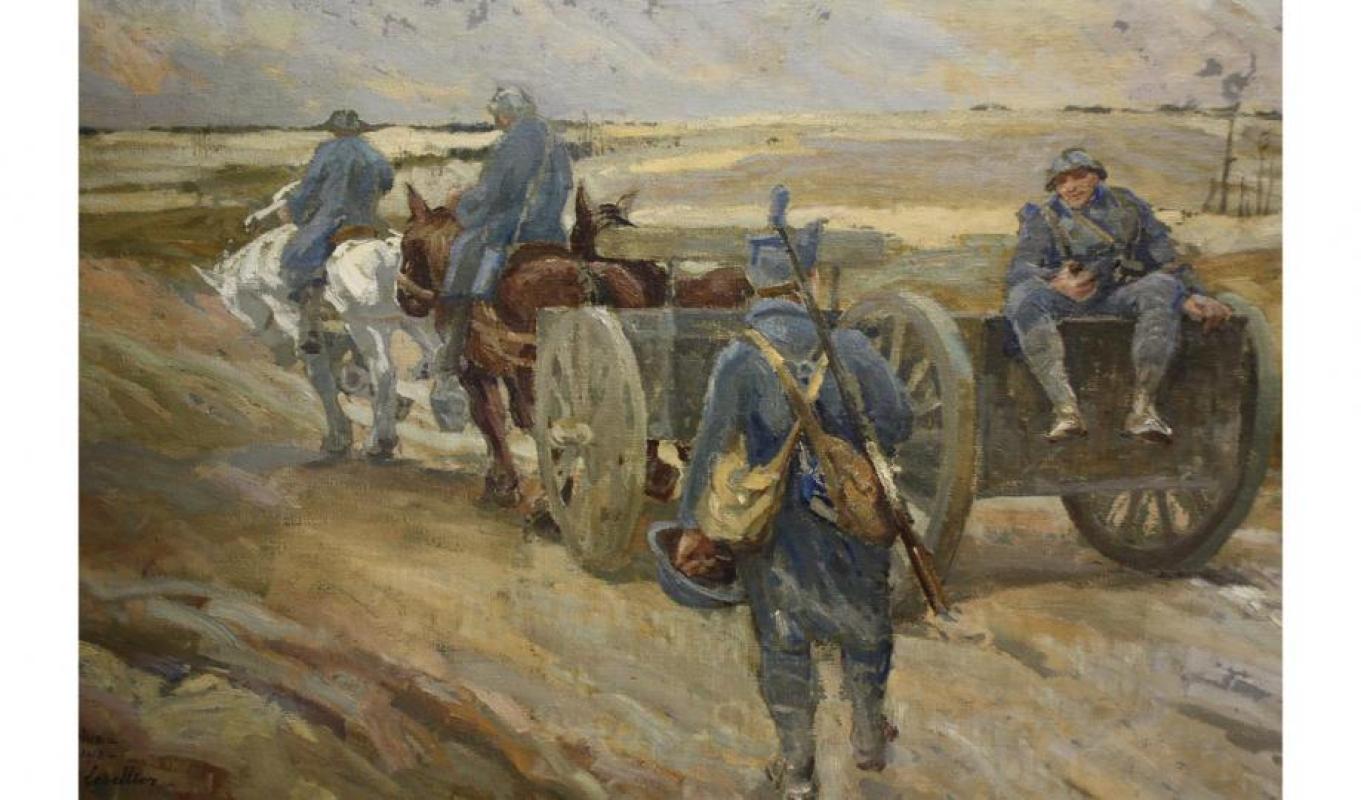 Oil painting by French artist Edmond Lesellier of a scene of a devastated landscape with a French artillery caisson and limber with horses and crew, 1918. 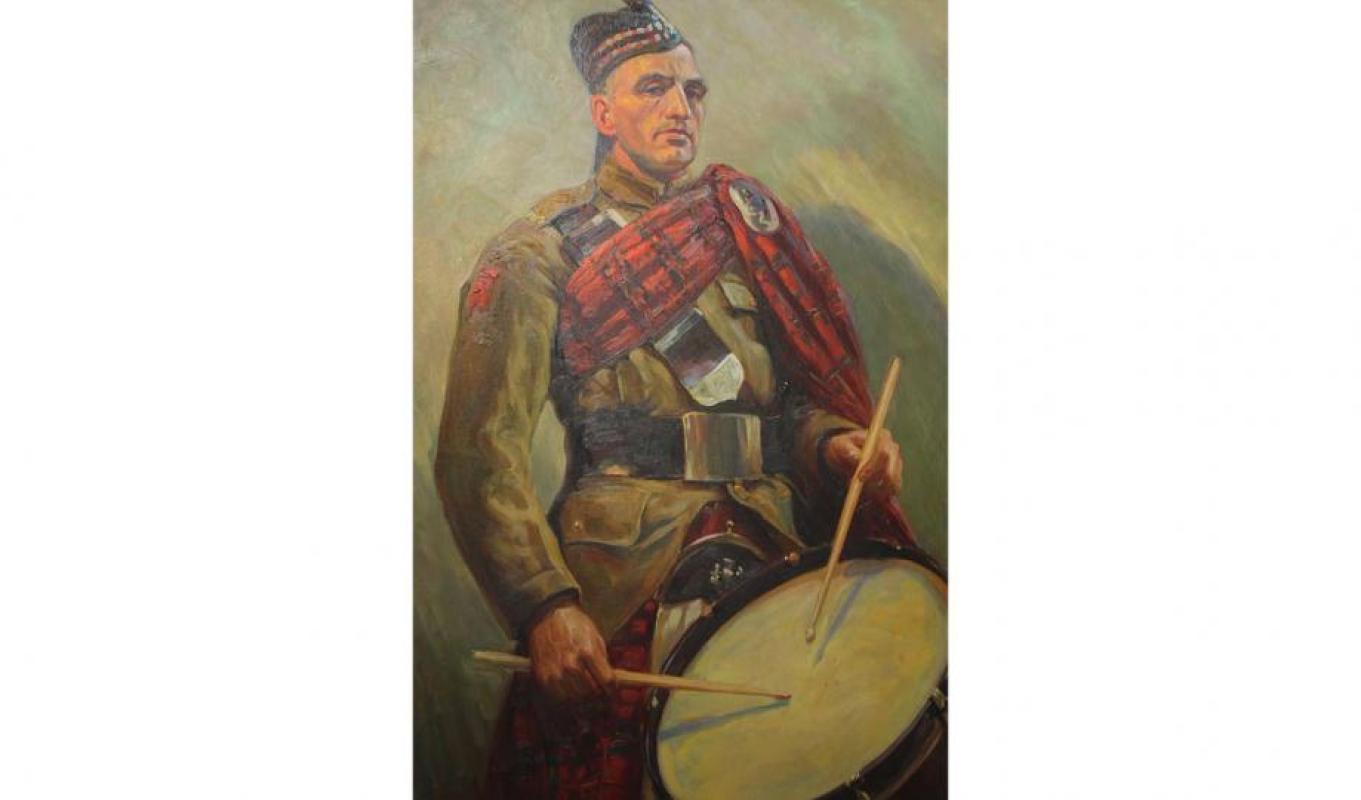 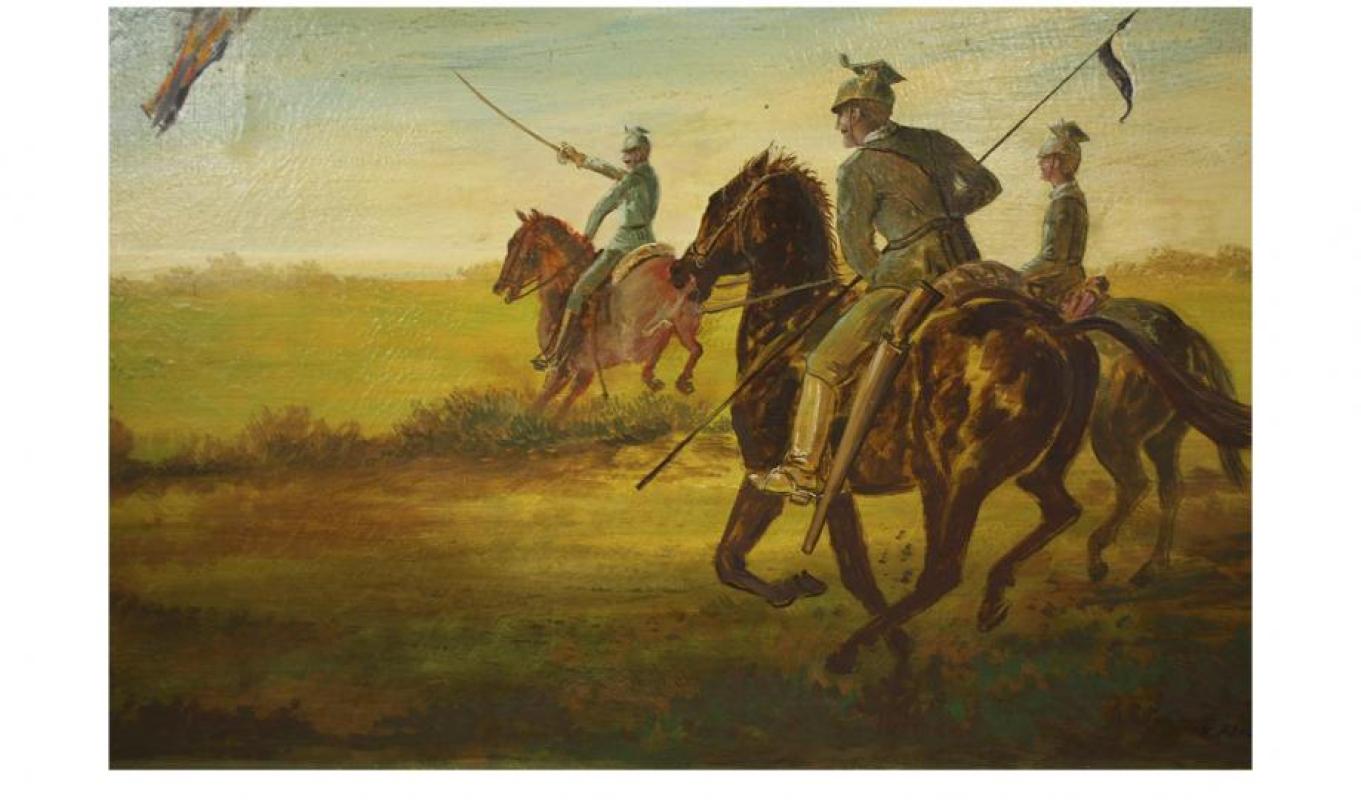 German 1917 painting by Karl Ahoff of a cavalry patrol and an airplane, showing the juxtaposition between the old mounted warfare and the new aerial warfare. 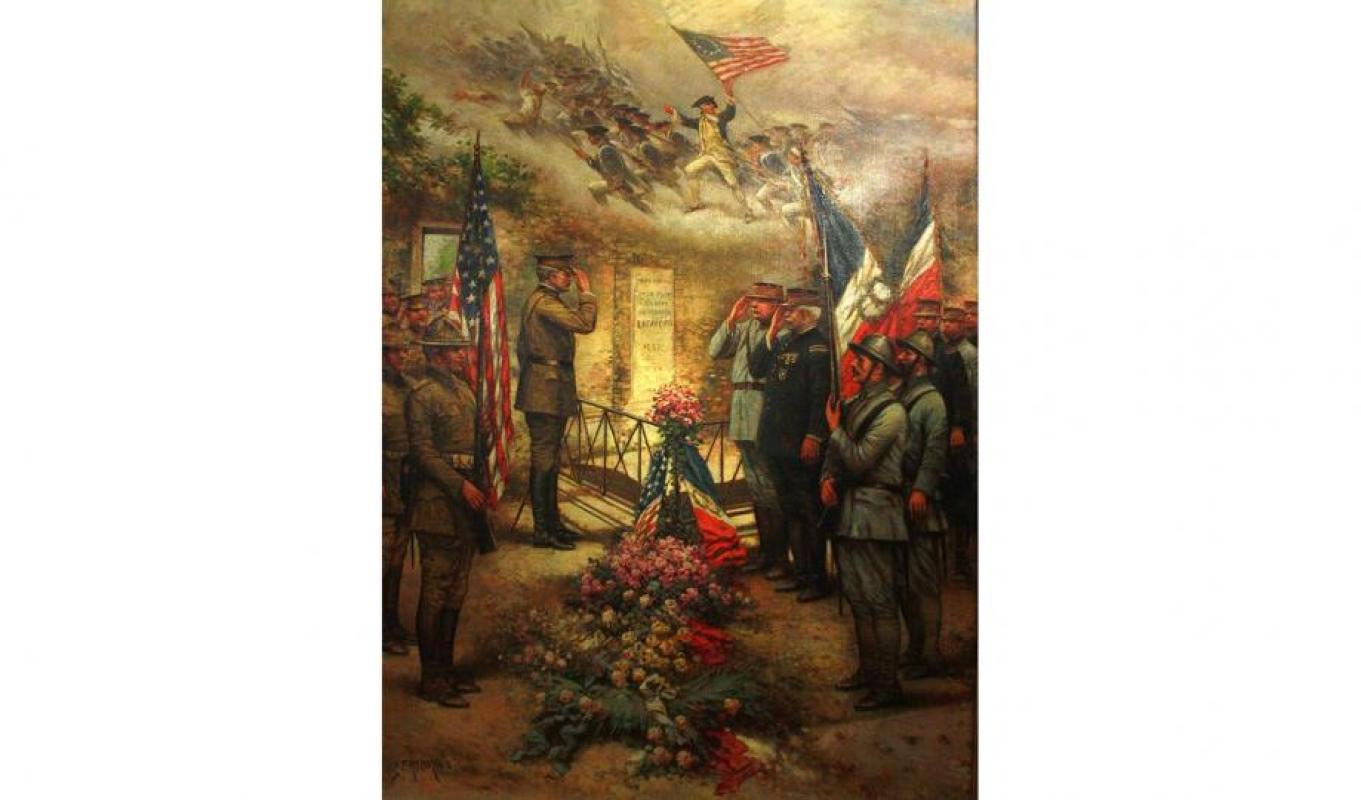