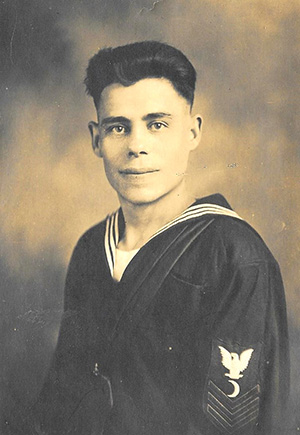 Steve Hadley’s grandfather, Mike Hachinski, was a proud American and veteran of WWI. On Veterans Day 2017, Steve and his family dedicated a brick on the National WWI Museum Memorial’s Walk of Honor in remembrance of Mike and his service in WWI.

“My grandfather came to the USA via Ellis Island as a young boy. My Family called him Pop or Pop Hachinski. He served aboard the USS Arizona during the First World War and was a Baker First Class Petty Officer. When he was discharged, he returned to Kansas City, Kan., and opened his own bakery, Mike’s Bakery, on Fifth and Elizabeth. The bakery served the nearby Croatian, Slovenian, Serbian and Polish neighborhoods. He made the best bread in the city and people came from miles around to shop at his bakery.”

Steve also remembers his grandfather as a very proud American, a pride he passed on to his family. “He always properly displayed the American Flag at his home and after passing away on June 11, 1973, his funeral service was held on June 14, Flag Day. On that day, the flag was displayed everywhere. The America Flag in all its glory lead the way to Pop Hachinski’s final resting place. It was a beautiful journey beyond words and for our family it was also confirmation that the country also appreciated his service.”

When asked what the Walk of Honor means to him and his family, Steve replied, “It is a marker in time. Pop was proud to be an American and he was living his dream. His family will always remember him and the roots he sunk into Strawberry Hill in the middle of the greatest country. He was a strong and courageous young man who took an ocean vessel and traveled to a country where he did not know the language. His family will always have a place for him and the brick is a simple reminder of this for generations to come.”

The Museum and Memorial is proud to honor Mike Hachinski and the many others who have Walk of Honor bricks. If you are interested in purchasing a brick for a loved one, visit our Walk of Honor page.