Join the 2019 Battlefield Tour for an intimate tour of the Turkish peninsula, tracing the route of the Allied forces in the Gallipoli Campaign from landing to evacuation.

This schedule may be subject to change. 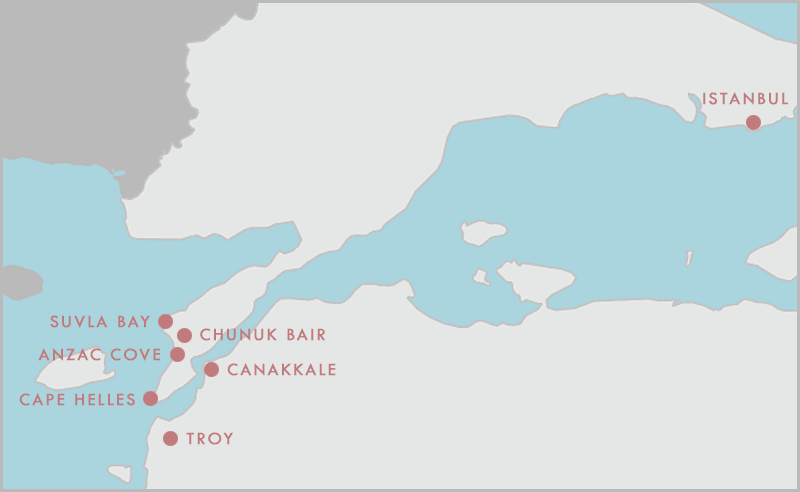 The Group will meet at a designated airport hotel before heading overland to Canakkale in a modern, air-conditioned bus with on board wifi and complementary water. The journey will be broken by a stop at a restaurant in Tekirdag, world famous for its kofte. The final part of the day's trip will be a ferry ride crossing the Dardanelles to Asia, before arriving at our welcoming hotel in Canakkale, the Grand Anzac.

Starting at W Beach, Cape Helles in the morning, we will see the cemeteries of Lancashire Landing and V Beach. Crossing the fields around Hunter-Weston Hill, we will arrive at the magnificent Helles Memorial to the missing. We will then visit Sedd el Bahr, where the substantial Turkish defenses awaited the men assaulting from the famous River Clyde. Lunch will be taken at a local café.

In the afternoon after visiting to the isolated grave of Lt. Col. Doughty-Wylie, VC, our walk will go “up the line” along the weather-beaten Gully Ravine to Pink Farm, allowing us to visit spots that once housed overburdened Field Ambulances and countless billets in its shelter, alongside wells sunk by the Engineers to quench the parched thirst of the troops.

We will take a boat trip around the landings of Anzac Cove in the morning, before walking from the stunning Beach Cemetery to the high ground of Lone Pine. Here the Australian Imperial Force (AIF) stormed ashore and scrambled past the “Sphinx” to breach the Turkish lines. After an optional climb to Plugges Plateau, we will ascend Boltons Ridge via Shell Green—where the briefest of cricket matches was played under fire—ending at the Lone Pine Memorial with its breath-taking views over the Aegean. We'll enjoy a packed lunch near Lone Pine.

Clinging to the cliffs above the beaches, we'll chart the frontline held by Anzac troops in the afternoon. Intimate burial spots at Parade Ground Cemetery and Johnston’s Jolly join preserved trenches and memorials named after courageous and colorful Australian characters. We will finish at the tragic site of the attack by the Australian Light Horse on The Nek.

The day begins at Nibrunesi Points, where we will follow the initial landings of the new Army Troops as they assaulted up the hill Lala Baba and approached the Salt Lakes and beyond. We will then explore Scimitar Hill and Green Hill as we look at the last great attack of the Gallipoli Campaign. We will then eat a packed lunch at Green Hill Cemetery.

After a stop at Chocolate and Green Hills, we spend the afternoon looking at the ill-fated Suvla landings in August 1915. Our walk will begin on the beach before passing Hill 10 and following in the footsteps of the 5th Norfolk’s, uncovering the true story behind the vanishing battalion.

We'll experience the most spectacular of any battlefield walks from the heights of Chunuk Bair down to the beaches below. Focusing on Kiwi forces and New Army troops, we will follow their battle along the Rhododendron Ridge. This walk is on steep, mountainous terrain along a winding trail and is not for the faint-hearted but enormously rewarding.

Afterwards, we'll have the chance to unwind in Canakkale in a quayside cafe, visit the local bazaars, the old fort and its Naval Museum, or take an excursion to the Ancient City of Troy (a 40 minute drive), the group will then enjoy a final meal together in a local restaurant. We end the day with an optional dip in the Aegean Sea, so don’t forget your trunks.

Departing the hotel we will transfer back to the airport in Istanbul, where the group bids farewell for onward flights. It is also possible to arrange an Istanbul extension with advance notice.