This schedule is subject to change. 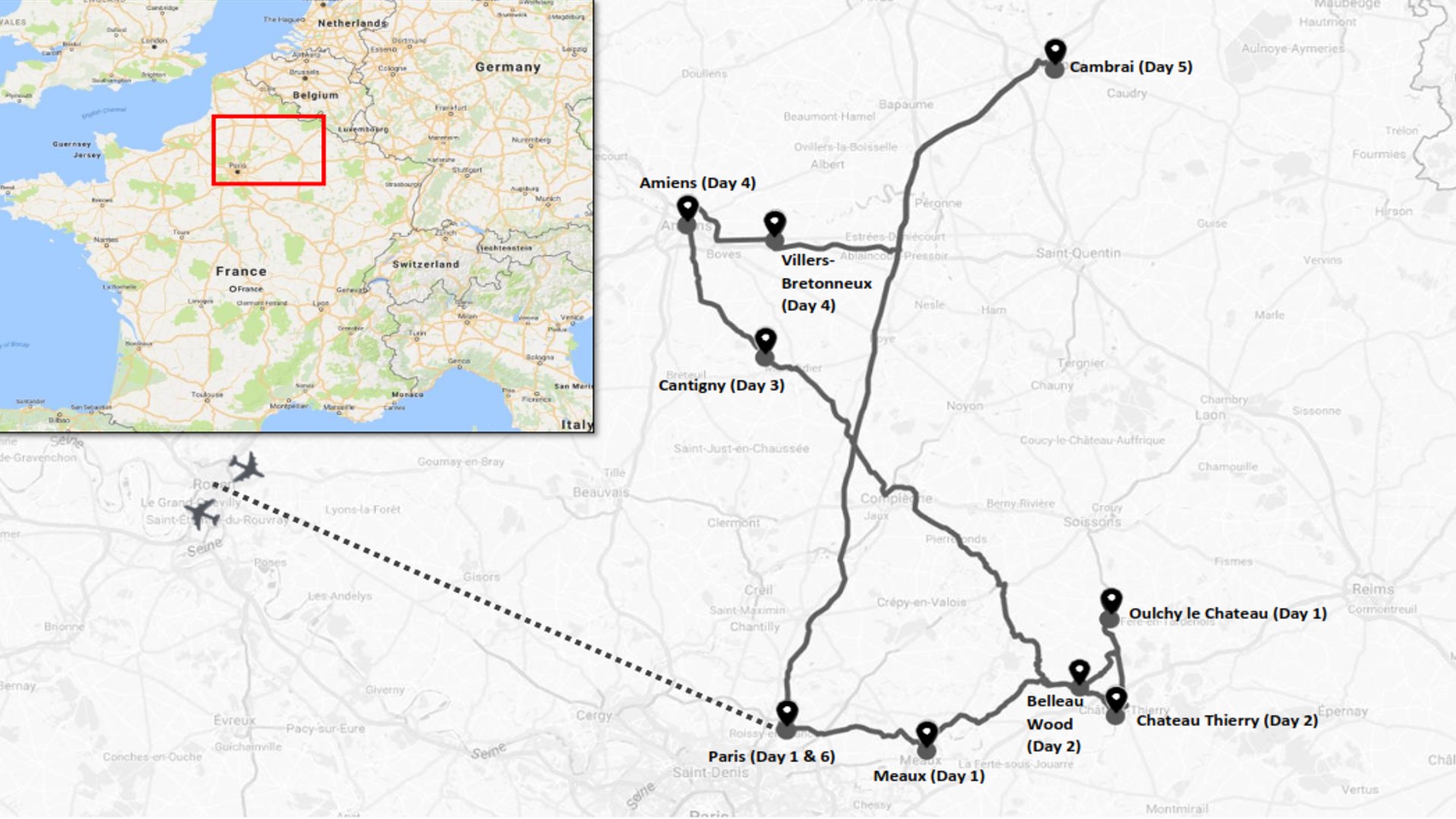 Tour participants will be met nearby Charles de Gaulle Airport by the guides and a 35-seat luxury coach, proceeding directly to the Museum of the Great War at Meaux. (It is the responsibility of participants to arrive on time at 2 p.m. on Sept. 2, so consider an earlier flight if necessary.) Then we will drive across the Marne to the remarkable memorial of Les Fantômes at Oulchy-le-Château (sculpted by Paul Landowski, creator of the iconic Christ the Redeemer statue in Rio de Janeiro) which will provide us with the backdrop for our first stand before we proceed to Chateau Thierry and our hotel.

This will be a full day of exploring Belleau Wood, following the exploits of the 2nd and 3rd Divisions who were rushed into action to stem the German offensive which threatened to break through the Allied lines and reach Paris in June 1918. The subsequent month-long battle to secure the Wood, which the French re-named Bois de la Brigade de Marine in honor of the Doughboys who fought here, is a story of confusion and great personal heroism as the Doughboys learned the realities of attritional warfare. We will seek to make clear the real significance of this seminal battle before returning to our hotel in Chateau Thierry.

In the morning the group will visit Chateau Thierry where the men of the 3rd Division and two young American Lieutenants saved what could have been one of the great disasters of the war, transferring afterwards to the village of Cantigny where the 1st Division attack heralded the awakening American giant, as the A.E.F. made their first major challenge in battle to the German army. The evening's hotel will be in Amiens with an opportunity to visit Amiens Cathedral and admire the magnificent western facade of this Gothic masterpiece.

The first stop will be at Le Hamel, where a small contingent of Doughboys marked Independence Day in 1918 by collaborating with the ‘Diggers’ of the Australian Army in what is often regarded as the first modern ‘all-arms’ battle that set the pattern for warfare in the 20th century. The group will have lunch at Villers Bretonneux where the Australians halted the German offensive in April 1918. Afterwards will be a tour the battlefields of Amiens which saw the start of the final ‘One Hundred Days’ Allied offensive which culminated in their final victory and visit the crash sight of ‘The Red Baron’ before proceeding to the hotel at Cambrai.

The group will spend the day examining the actions of the 27th and 30th Divisions as they helped break the Hindenburg Line in September 1918. A visit to Flesquières to see the iconic WWI tank D51, known as Deborah, will reveal the story of how one man, Phillipe Gorczynski, single-handedly found and preserved this extraordinary reminder of the conflict. The day will conclude with a visit to the grave of a British officer and the tragic story behind one of the most poignant poems of World War I before proceeding back to the hotel and a final group meal.

We will proceed directly to Charles de Gaulle Airport to ensure that you have ample time to prepare for your homebound flights.