National World War I Museum Board of Trustee Brad Bergman recently provided the museum with an outstanding addition to its collection.

Bergman acquired an insignia-decorated section from a tail assembly fin of a French Breguet XVI B2 bomber and donated the object to the Museum. The bomber was originally part of the 131st Escadrille, Bomber Group 4, flown by an American “loaned” to the French unit. 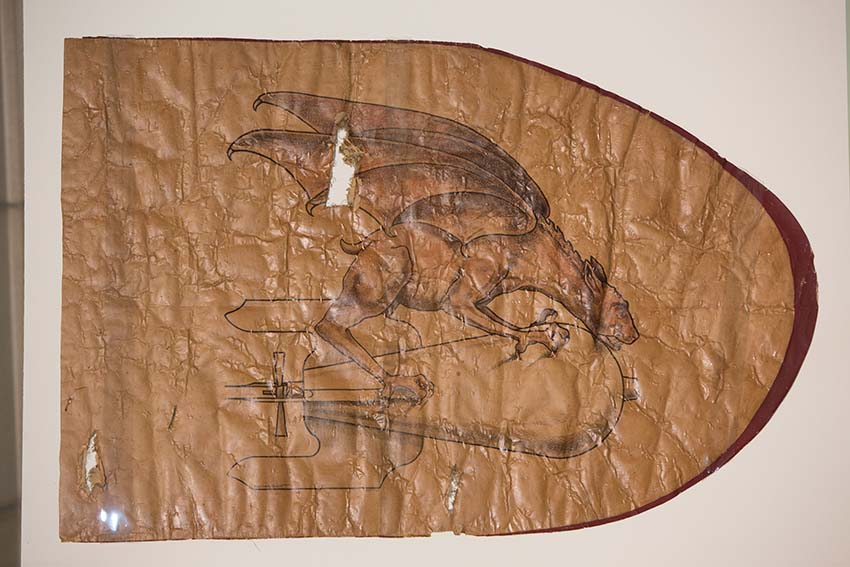 The pilot was Lieutenant Paul Edson Green, a Buffalo, N.Y., native who was an architect before the war. Lieutenant Green was forced to crash land his bomber on Sept. 23, 1918 and he had the fabric section with battle damage removed as a souvenir.

The insignia chosen by the 131st’s commander Lieutenant Beaute is a chimera (a mythological being) copied from a sculptured piece on the Cathedral Notre Dame of Paris. The aggressive looking creature is holding an English-made bomb and the insignia is actually a decal which was applied to the airplane fabric. An archival collection on the service of Paul Edson Green was included with the fabric and it holds his flight logs for all 29 missions, a unit-published history, photographs and other materials.

Soon, the French bomber fabric will be exhibited in the air war case on the west side of the main exhibition space near the Ford ambulance.