“Generally speaking, I should say that the officers were well treated: many of them were given a surprising amount of liberty. But the men did not fare so well. Most of them had been at Philippopolis, where the conditions were disgraceful. Not only were the men deliberately neglected, but in many cases they were subjected to brutality. The parcels sent out to them were stolen from them beneath their very eyes. I was delighted to see the other day the announcement of Mr. Balfour that the Bulgarian Commandant of Philippopolis would be brought up for trial: if a tenth of the charges brought against him can be proved, he richly deserves to be shot.”

— an excerpt from The Salonica Side-Show by V.J. Seligman

Bulgaria entered World War I on the side of the Central Powers on Oct. 12, 1915, having attacked Serbia, one of the Allied nations, on Oct. 5 in order to acquire part of its territory. In response, Great Britain declared war on Bulgaria on Oct. 15 and was joined by France and Italy during the next two days. Working with a Greek government divided in its support between the Allied and Central Powers, the British and French sent an expeditionary force of 150,000, which landed at Salonica, to support Serbia.

The Museum recently acquired a scrapbook (view the entire content) that helps to tell the story of the Bulgarian prisoner of war camp in Central Bulgaria at Philippopolis, Plovdiv in Bulgarian, that held approximately 5,000 Allied prisoners. The camp was comprised of eight barracks situated around a square, one inhabited by French prisoners, two by British, and five by Serbians. The prisoners worked as laborers in canal and road construction in the area. 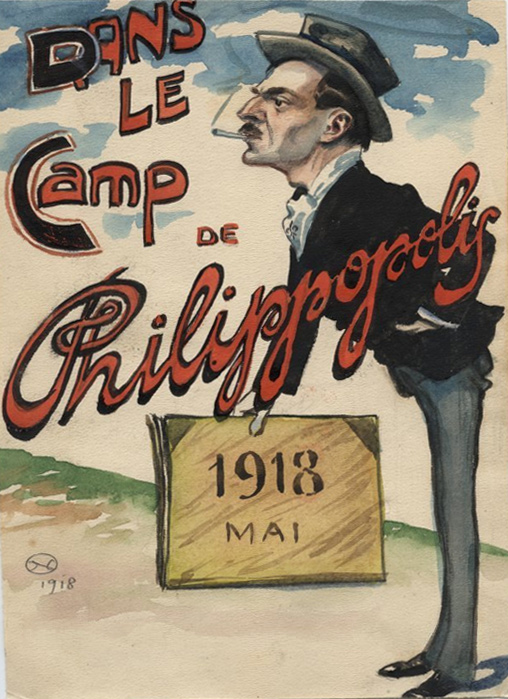 From the service of Count Alexandre Orlowski. He was captured by Bulgarians on the Salonika Front and was a prisoner in the Goino Pauicheievo (by July 1916) Philoppopolis (Plovdiv) (by July 1918) prisoner of war camp in Bulgaria.

The scrapbook was previously in the possession of a French officer named Alexandre Orlowski (who used the aristocratic title “count”) who served as a second lieutenant in the 8th Regiment of the Chasseurs d’Afrique on the Salonica Front. He was captured by the Bulgarians in mid-July 1916 and was eventually transferred to Philippopolis in July 1918.

The album contains nearly 100 photographs including studio portraits of Allied officers, groups of prisoners of various nationalities, camp buildings, Bulgarian civilians and prison guards. The photos feature intriguing depictions of camp life such as prisoners dressed in costumes (some as women), clowns and exotic figures with musical instruments. The album also contains 16 pen and ink and watercolor illustrations that are portrait studies of prisoners. The works include a French Chasseur Alpin with a blue beret; a Black African French soldier with a red kepi, several individuals in civilian clothes and several striking images of human heads on animal bodies. Also included is an illustrated sheet with the French title “In the Philippopolis Camp May 1918.”

Kenneth Steuer, PhD, adjunct professor of history at Western Michigan University who specializes in the World War I period notes: “Allied officers often took advantage of their time in captivity to draw and paint and they received art supplies from the YMCA. It was not unusual for POWs to show their art work in exhibitions, often with the hope of selling some material to earn money to purchase food.”

Having enough to eat was a central issue for the prisoners and their guards by the end of the war due to Bulgaria facing severe food shortages.

This acquisition was made possible by a philanthropic gift from Richard D. Rees, in memory of Janet Lee Rees. For more information about this scrapbook please contact collections@theworldwar.org.