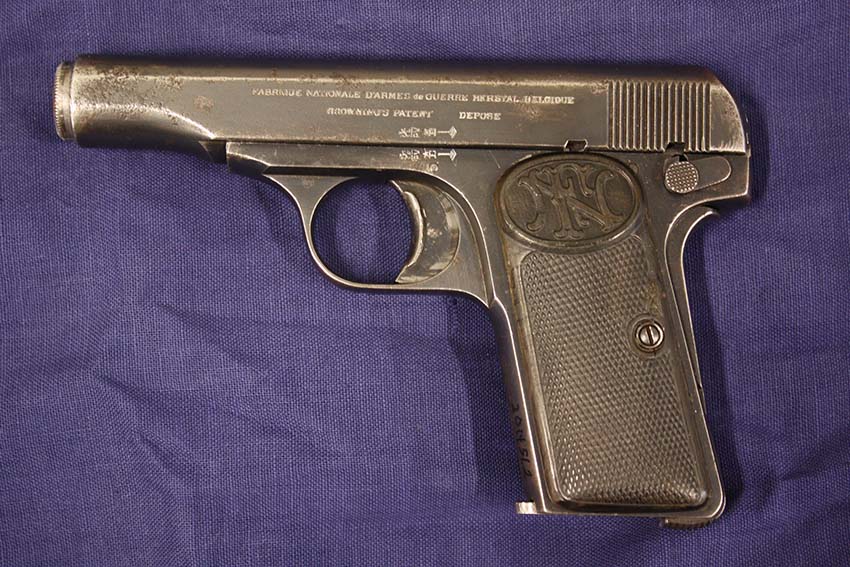 The pistol used by Gavrilo Princip on June 28, 1914 was a Model 1910 Belgian Automatic Pistol. It fired a 9mm Browning short cartridge (also known as caliber .380 ACP or Automatic Colt Pistol cartridge: a rimless, straight-walled pistol cartridge developed by American firearms designer John Browning). The pistol was manufactured in Belgium starting in 1912 from the original design and 1908 patent by Browning.

Four Model 1910 pistols were purchased in an arms store in a Belgrade, Serbia and then delivered by Milan Ciganović, a 26 year old Bosnian Serb, to the assassination conspirators. None had fired a pistol before. The general consensus of reference sources list four serial numbers of the pistols: 19074, 19126, 19075 and 19120. Ian Howgate, a research associate of Sophie Hohenberg et de Potesta (the Archduke's great granddaughter), has found that the Bosnian archive contains the evidence lists and this attributes the serial number of the pistol used by Princip as 19075.

A recent acquisition of the Museum is a same Model 1910 pistol, made at the same arsenal, Fabrique Nationale D’Armes de Guerre, Herstal, Belgium. It is marked with Belgian military acceptance marks. The difference is that this pistol is the 7.65mm/.32ACP caliber. Court documents from the investigation state that the pistols used in Sarajevo were 9mm.

This pistol was donated to the museum by long-time supporter, Richard Keogh, whose father’s British Army uniform is on exhibit in the main museum exhibition space.