Religious Icons in Art and War

Saint Javelin and Symbols of Resistance

She is clad in a mantle of green, a blue halo embossed with the Ukrainian trident around her head. Her hands are not clasped in prayer or outstretched for a blessing, but are grasping her namesake – a Javelin anti-tank missile launcher, the weapon acknowledged as the Ukrainian resistance’s best asset for thwarting and hold off the invading Russian army.

This 21st century viral icon has deep roots within religion and conflict, which is part of what makes the image so compelling. Use of Christian saint and Virgin Mary imagery to inspire action and foster hope in war dates back centuries, though mass production and public consumption of such images began during the First World War.

Prints from the collection of the National WWI Museum and Memorial show that the Virgin Mary and other Christian saints were facilitators of miraculous victories, inspiration for heroism within the armed forces and moving images of help inspiring others to give. 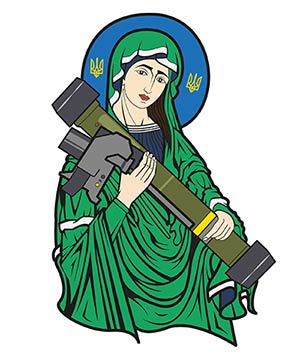 The Virgin Mary and Saint Joan of Arc were popular WWI representations that expressed patriotic and religious confidence in a righteous cause – as well as useful tools for inspiring others to give in support of the effort. In one depiction from an acknowledgement of support for the Polish Army, the Virgin Mary and infant Jesus shine above a city, divinely guiding the bravery and faith of the soldiers below. Not unlike her embodiment in Saint Javelin, it is clear in the Polish work that the Virgin Mary is a source of faith and sacred support for the cause.

Saints, particularly those with a militant penchant, were also widely called upon by the nations at war for support and inspiration. “Saint Joan of Arc Saved France, Women of America Save Your Country” reads a popular WWI advertisement for war stamps. In this depiction, Joan of Arc is ready to fight, with her sword unsheathed and her face lifted upward in optimistic bravery. Like Saint Javelin, her image is calling on all to do their part to assist in the effort, communicating that while collective and patriotic faith is a necessity, the miraculous alone will not save a country in conflict. The images of the divine serve to facilitate the heroism of those fighting, and a key to understanding the images -- the modern Saint Javelin included -- is the popular WWI tenet, “Help yourself, and Heaven will help you.” Collective belief goes far, but only so far as those willing to express bravery and endure sacrifice.

As for Saint Javelin, the current image is a retooling of an original work by Chris Shaw, “Madonna Kalashnikov,” depicting the mother of Jesus holding an AK-47 and first exhibited at the San Francisco Museum of Modern Art in 2013. In the nine years since, it has gone through many iterations online before becoming the current symbol of Ukrainian resistance against Russian military invasion.

The creation of the image of Saint Javelin combines and updates Christian saint and Virgin Mary iconography to create a powerful image of sacred resistance. The Virgin Mary fits the Ukrainian symbolism well, as she is the one whom many Roman Catholic and Orthodox Christians turn to in prayer for the help, love and protection of a mother. As the symbol has gained popularity online, it has become an emblem for those outside of Ukraine to show support for the nation (sales of stickers and other merchandise of the image raised hundreds of thousands of dollars in a matter of days, with proceeds going to the charity Help Us Help) as well as reinforced a narrative of Ukrainian resistance against Russia as divinely sanctioned, a righteous cause with sacred intercessors.

The shoulder-fired, anti-tank Javelin weapon is of incalculable value to Ukrainian fighters. Of additional incalculable value, to the hearts of the people trapped inside the bunkers, subways and basements of the country, is faith. Saint Javelin is faith – spiritual and physical – in Ukrainian bravery against an ongoing invasion. In one image and name, she is the ultimate help of Heaven and a single weapon that can bring down an army: Saint Javelin, pray for us.