The first special exhibition of the new National World War I Museum opened in 2006 in Exhibit Hall, one of the original, 1926 Liberty Memorial buildings. War Art drew completely from the Museum’s rich collections to examine a WWI topic in more detail. From the “high art” of such luminaries as France’s Pierre Carrier-Belleuse to the etched mess kit of an unknown American soldier to so-called “trench art,” this exhibit illustrated a wide range of pieces created during and after the war. A military historian once asserted, “Art and war are old companions. Battlefields and soldiers have been popular subjects with artists since earliest times.” Here are a few examples from our extensive collections:

“Sergeant Ian MacGregor” (1921 – oil). At the 1921 site dedication of the Liberty Memorial, Kansas City artist Daniel MacMorris met Sergeant MacGregor, who attended the ceremony with his Scotch-Canadian Highlander regiment. MacGregor posed for MacMorris and his classmates at the Kansas City Art Institute.

The image of the bored soldier, sitting in his trench, twisting and hammering brass shell casings into vases, is one of the longest-running snippets of folklore from World War I. It is true that American and other soldiers wanted souvenirs of all types, and they purchased decorated, recycled shell casings on a grand scale, but the front-line soldier had neither the tools nor the time to create many of the fantastic decorations.

As late as 1921, mass-produced shell art was still being sold to souvenir-seeking Doughboys. An advertisement in an American Legion Weekly from that year touted a “75mm ash tray – the Ideal Christmas Gift – a genuine 75mm cartridge with original markings on base. Get an extra one for a pal.” The $1 piece of shell art was produced by the Keeler Brass Company of Grand Rapids, Michigan.

“The French had quite an industry behind the lines. They filled the shells [artillery shell casings] with sand and then using a punch and other tools made decorations and inscriptions.” Second Lieutenant Allen B. Brown, 119th Field Artillery, 32nd Division, American Expeditionary Forces, described the French cottage industry of producing shell art or so-called trench art.

The soft aluminum of the U.S. Model 1910 mess kit (meat can) provided a canvas of sorts for the soldier with a knife.

During the war the steel helmets worn by the Doughboys were unadorned. Unit insignia were the first objects painted on helmets, but this was rare before the cessation of hostilities due to the concern that the enemy would gain information from seeing the insignia.But after the guns were silenced, the Doughboy artists got busy with painted insignia, itinerary, maps, pseudo-camouflage, and battle scenes. Some painted helmets were done on commission for American soldiers by German prisoners of war. Painted helmets also were made into lamps stateside.

Drawings by Lester G. Hornby. Born in Lowell, Massachusetts, in 1882, Hornby studied at the Rhode Island School of Design and the Art Students’ League of New York. He studied in Paris from 1906 to 1910, where he served as Director of the American Art Association of Paris. He was in Brittany, France, when the war started in 1914. When the Americans arrived in 1917, General Pershing gave Hornby a pass to travel among the American Expeditionary Forces where he made these etchings.

Art That Delivered a Message

Soon after the outset of World War I the poster, previously the successful medium of commercial advertising, was recognized as a means of communication in spreading national propaganda with unlimited possibilities. The poster could impress an idea quickly, vividly, and lastingly.

In almost every country involved in the war, the poster played its part in the war effort. The posters of 1914-1918 illustrate every phase and difficulty and movement – from recruiting to munitions work and from war loans to the work of women and the Red Cross.

In 1920 English writer Martin Hardie stated succinctly the poster’s place in World War I history: “They had their story to tell and message to deliver. Their business was to waylay and hold the passersby and to impose their meaning upon them.”

Soldiers wanted souvenirs, and many a cottage industry developed to meet that desire. Embroidered silk handkerchiefs, many with intricate designs and colors, provided a souvenir that could easily be carried and mailed home to a mother, wife, or sweetheart.

Corporal Walter Bullard, 603rd Engineers, American Expeditionary Forces in France, wrote his mother on August 16, 1918: “I am enclosing a handkerchief that I bought for you. It is rather pretty with the French flag and the Stars and Stripes together. They sell quite a bunch of them to the boys to send home, and there is hardly a town that I have been in that you can’t find hundreds in stores. They have all colors and with different words and such. Some have the Allied flags worked in the corner.” 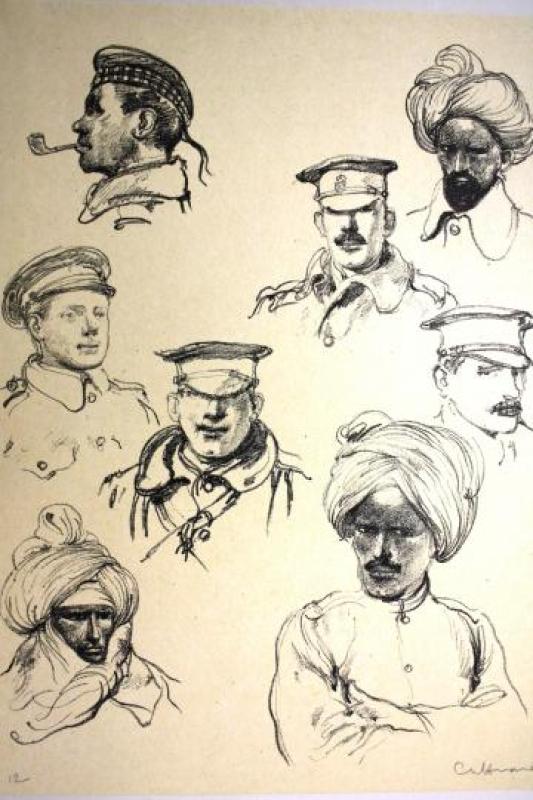 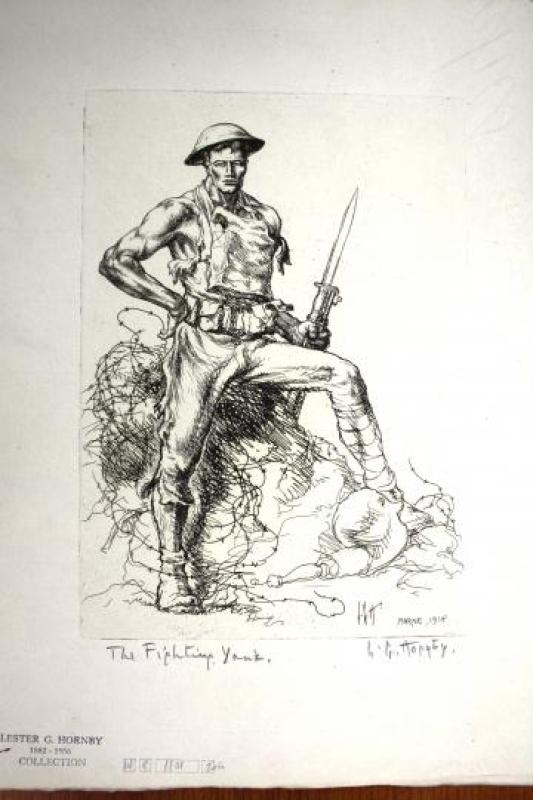 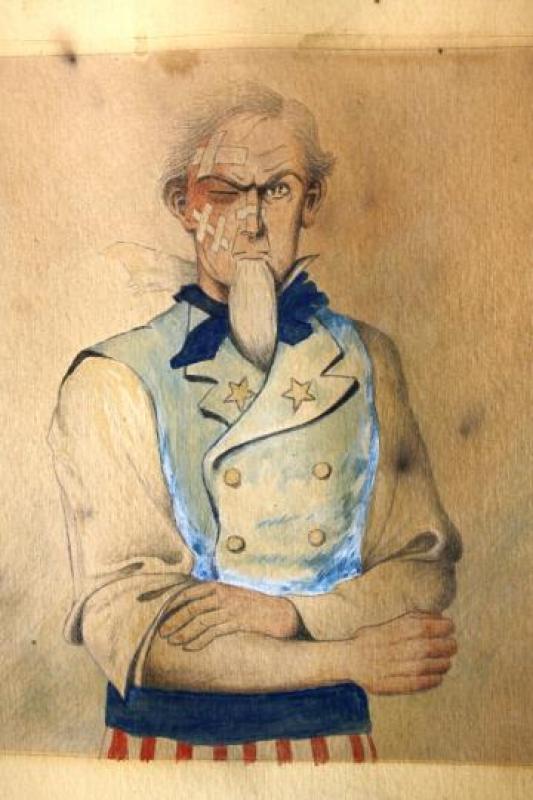 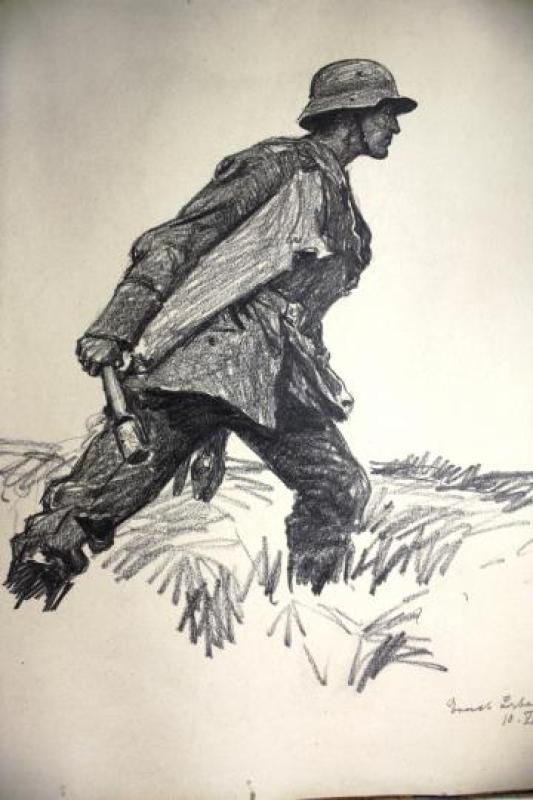 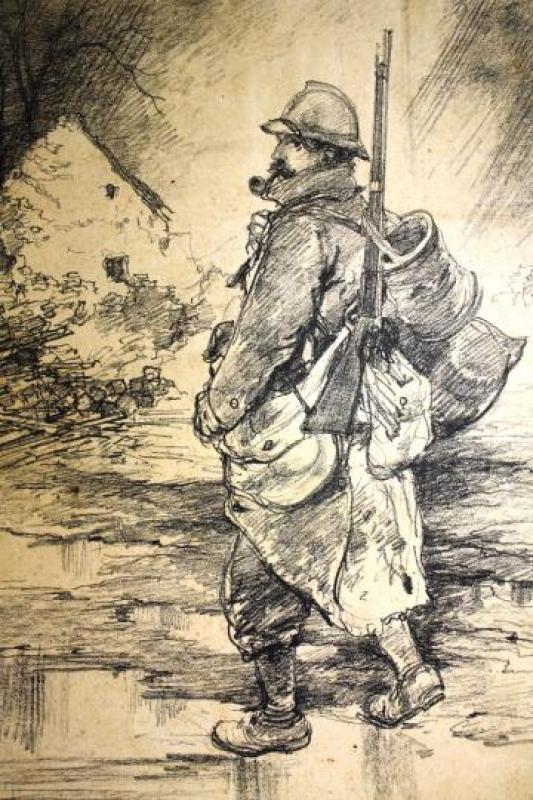 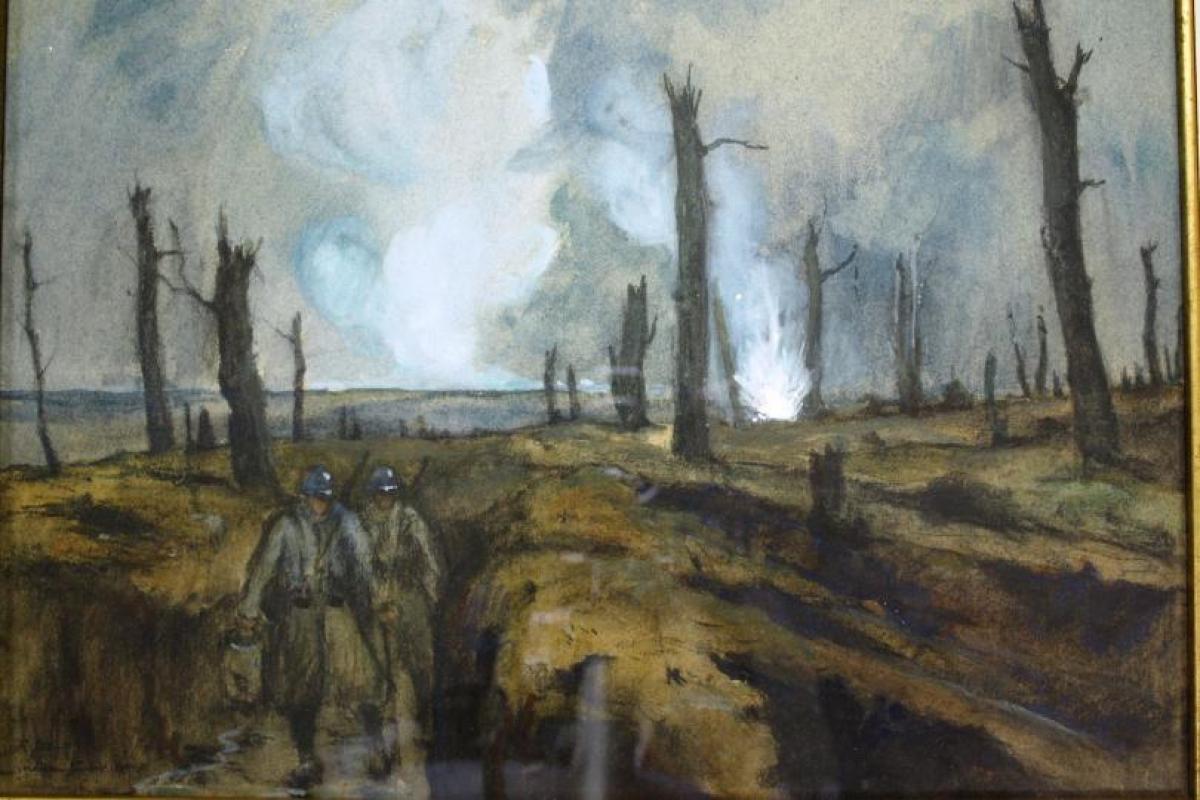 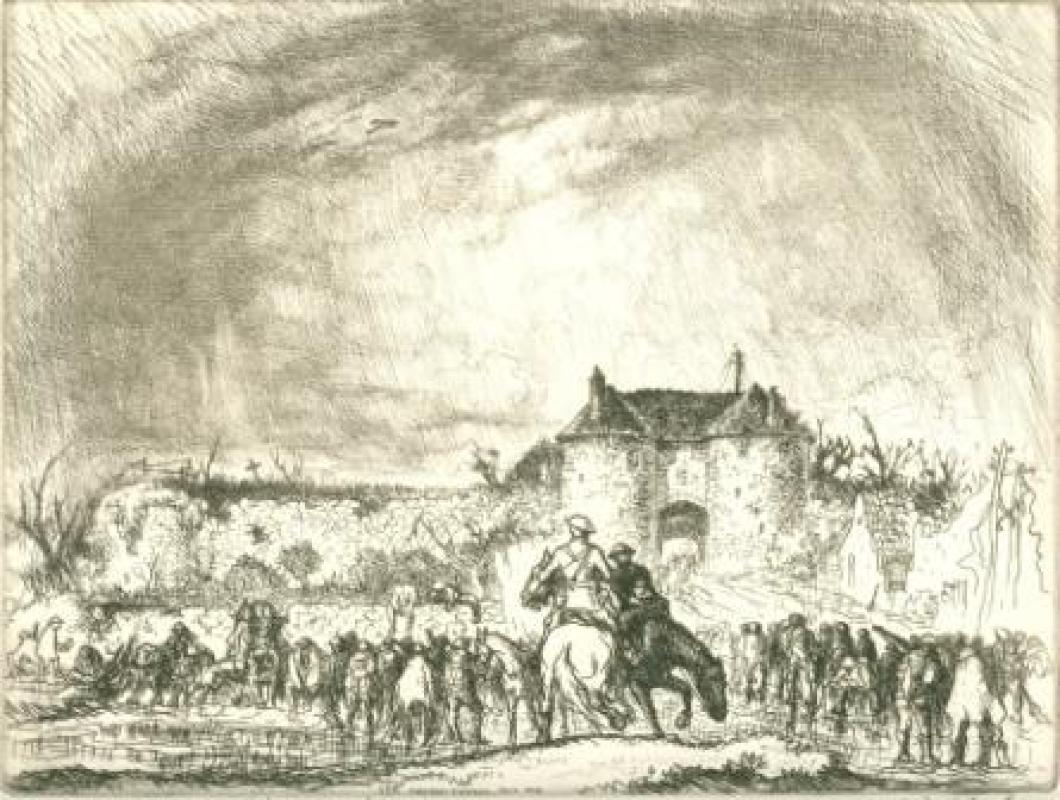 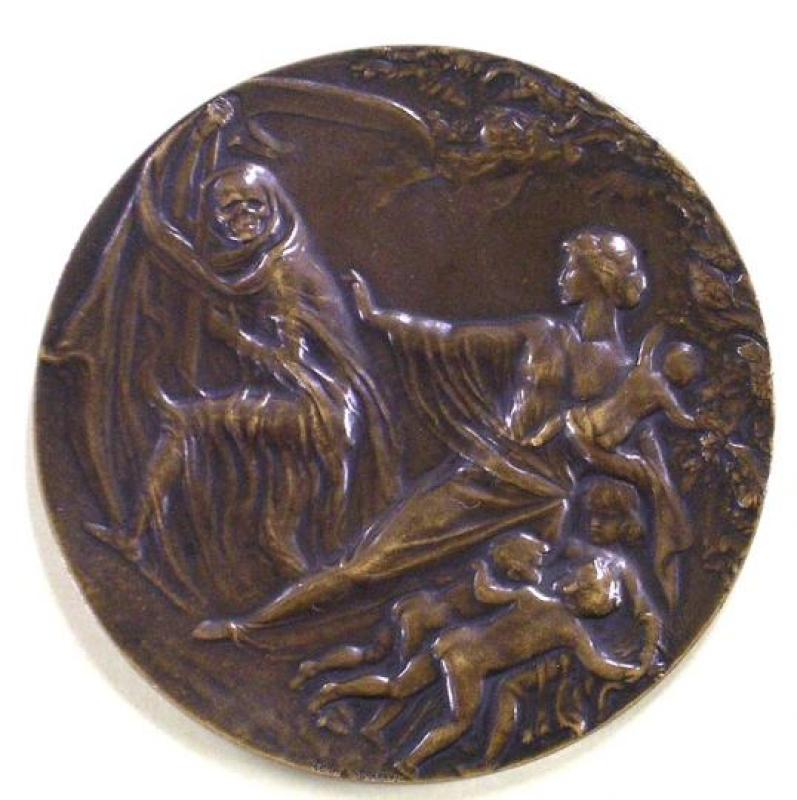 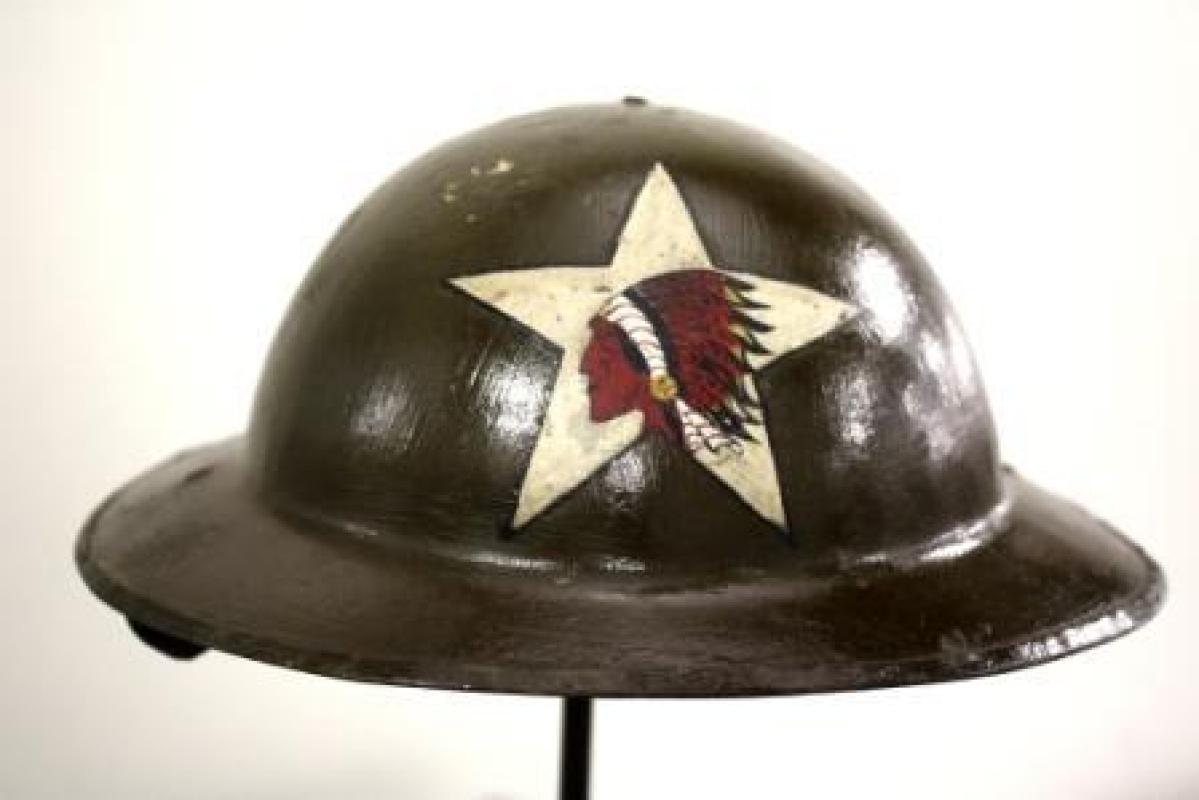