War Around Us: Soldier Artist Impressions

However, as the work attests, inspiration can take many forms, providing a glimpse into a world that otherwise would be unfamiliar. Although markedly different in their styles and subject choices, the featured artists—Jean Lefort, Curtiney George Foote, Charles Thatcher Shellabarger, Myron Chapin, and Clifford Warner demonstrate several ways one can capture wartime experiences.

“For the victoire has déjà arrived! The armistice was signed at 5 this morning and the firing was to cease at 11, and the Allies were not to advance beyond the positions then held till further orders from Marshal Foch. At noon, the bell began a joyful ringing that lasted for a full hour; everyone decorated their houses with the Allied flags and coursed through the streets singing and dancing, for now singing and dancing is again permitted.”

Using the fields, villages, and people who witnessed the devastation of World War I, the artists convey a shared understanding of the importance in depicting the look and feel of war.

For some of these soldier artists, the desire to create functions as a way to explore complex feelings, as shown in Foote’s seemingly celebratory portrayal of a victory parade and Shellabarger’s image of a French soldier’s grave. For others, art captures impressions of everyday life, such as letter-writing, shoe shining, and socializing.

“At daybreak we could see, to our horror, that in front of the trench and behind it the ground was covered with hundreds of French bodies. Complete lines, entire ranks of foot soldiers had been mowed down. This was the price paid for in advance of four or five hundred meters—something like one human life per square meter.”

These images make clear that the war was indiscriminate in its effects, but rather all around us, devastating families, communities, and ways of life. Despite this catastrophic event, they convey a shared humanity. A century after the war, this art retains its power as a testament to the experiences of those that lived it. 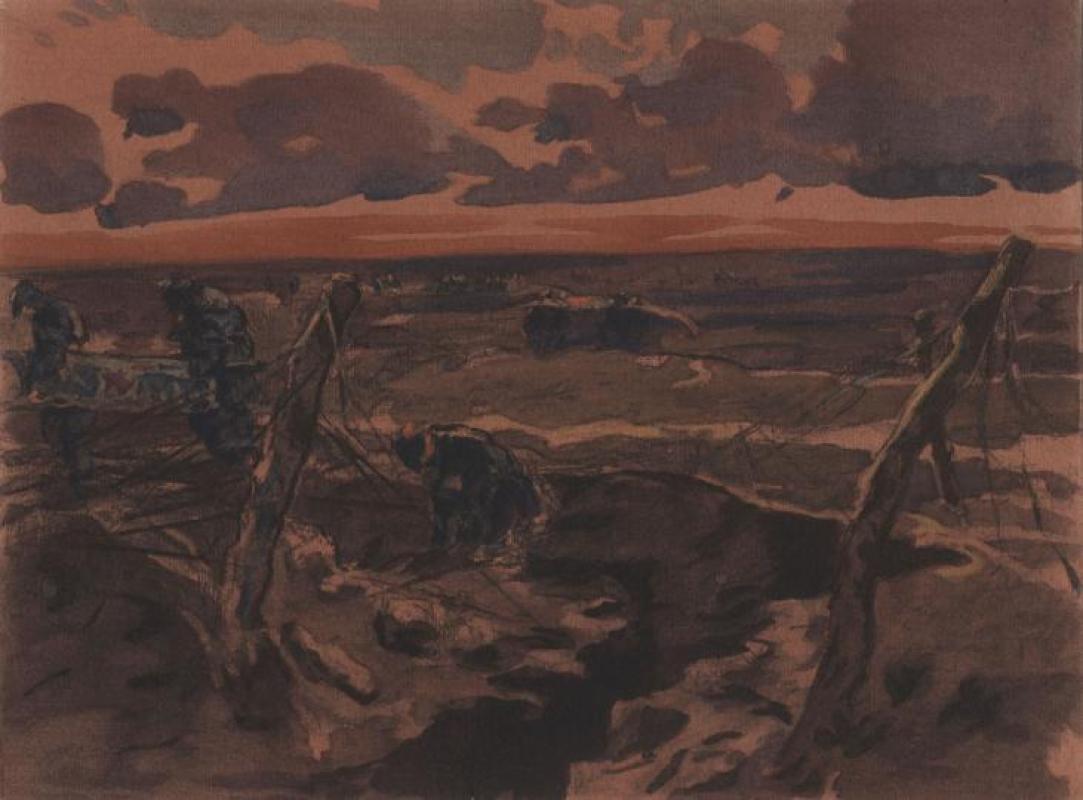 Jean Lefort, 1914-19. Watercolor. A red sunset washes over No Man’s Land after a battle. 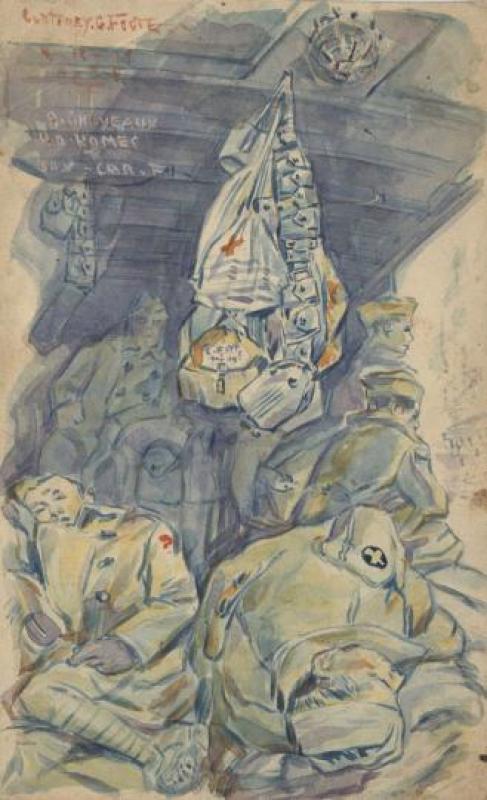 Curtiney George Foote, 1919. Watercolor. A “40 or 8 box can” (a car that could accommodate 40 men or 8 horses) transports sleeping American soldiers. 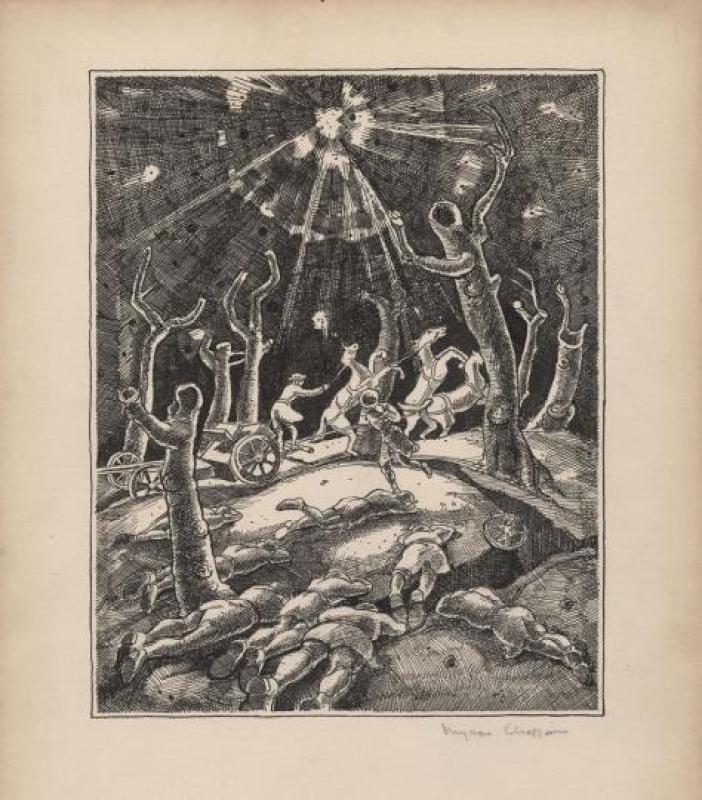 Myron Chapin, 1918. Pen and ink drawing. A shell explosion illuminates a dark sky, as soldiers, horses and defoliated trees bend and writhe, recoiling from the carnage of the detonation. 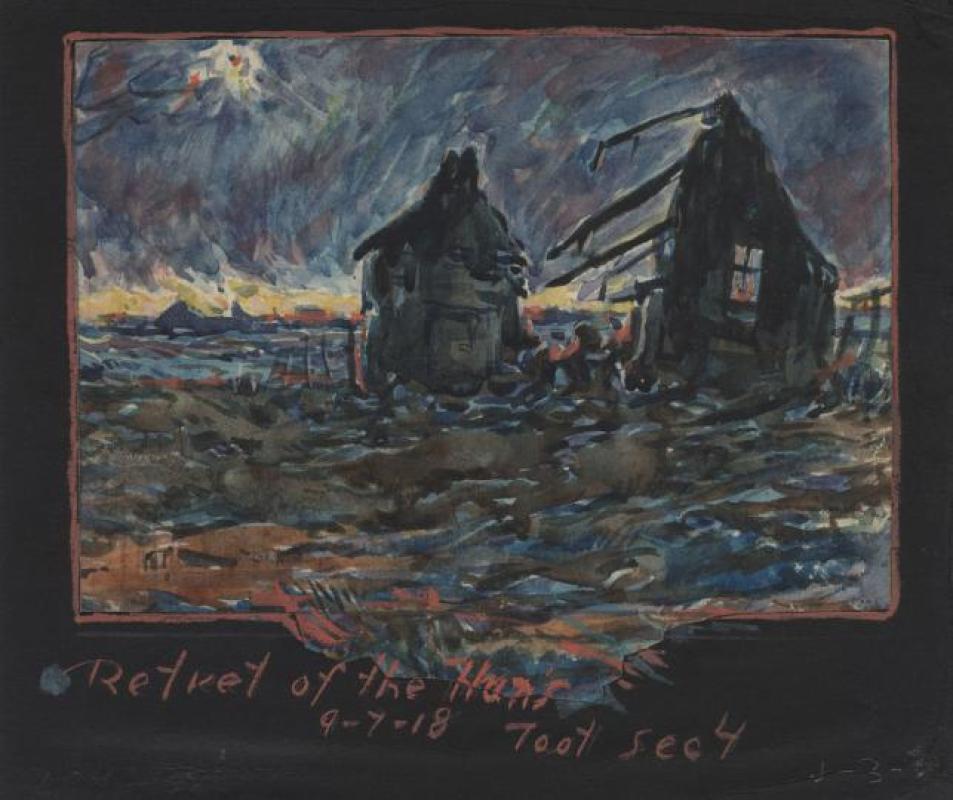 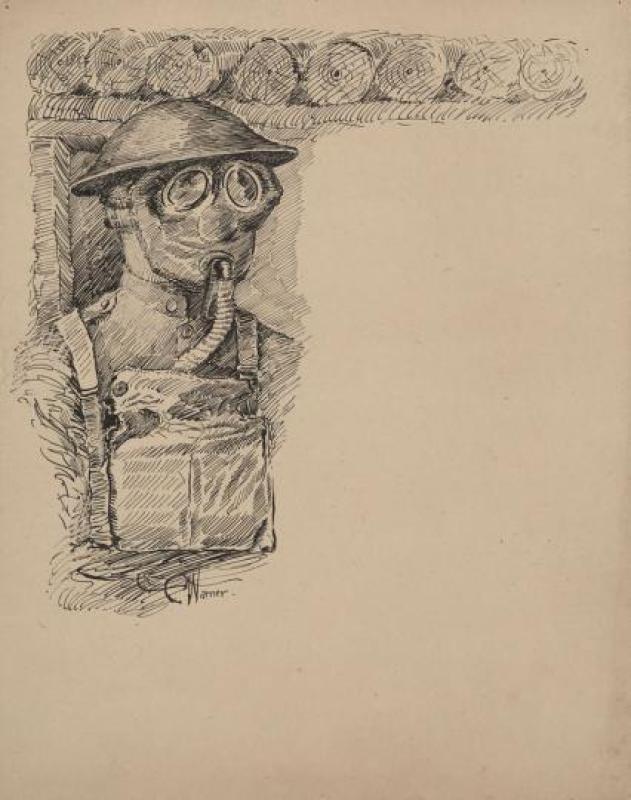 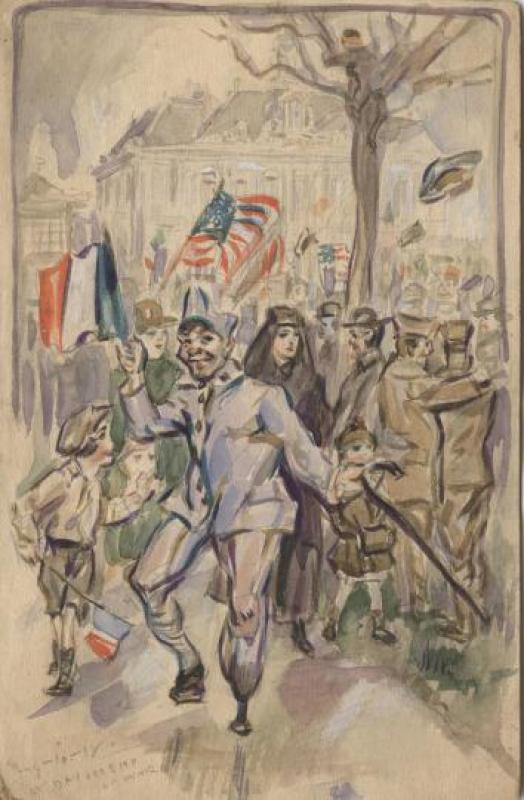 Curtiney George Foote, 1918. Watercolor. A seemingly celebratory image contains some somber notes including the veteran with the wounded leg and mourning widow. 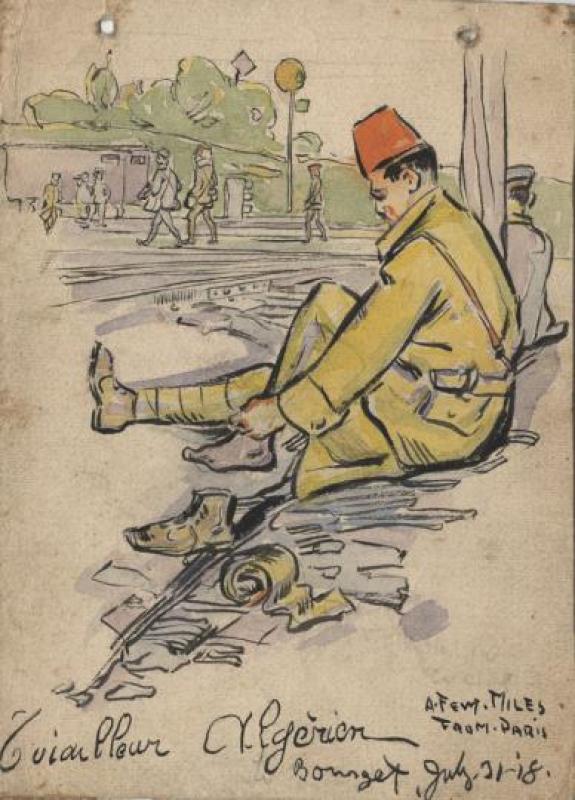 Curtiney George Foote, 1918. Watercolor. An Algerian tiralleur (sharpshooter), a French colonial solider, puts on his boots and spiral wrap puttees, about to board the train in the distance. 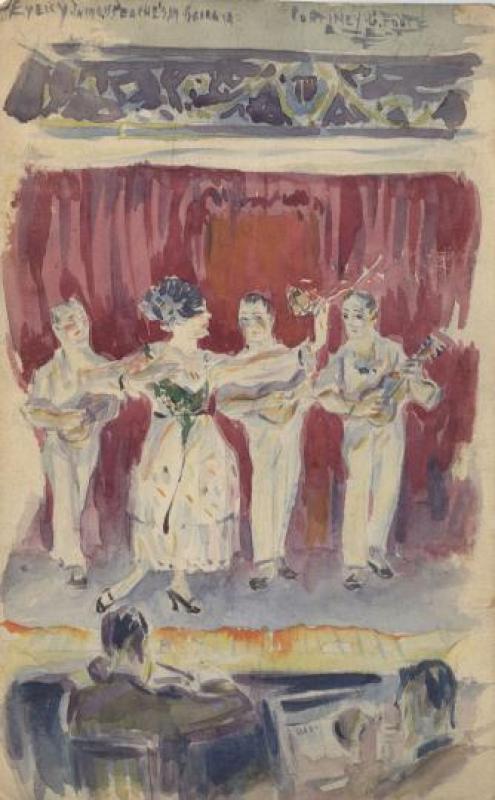 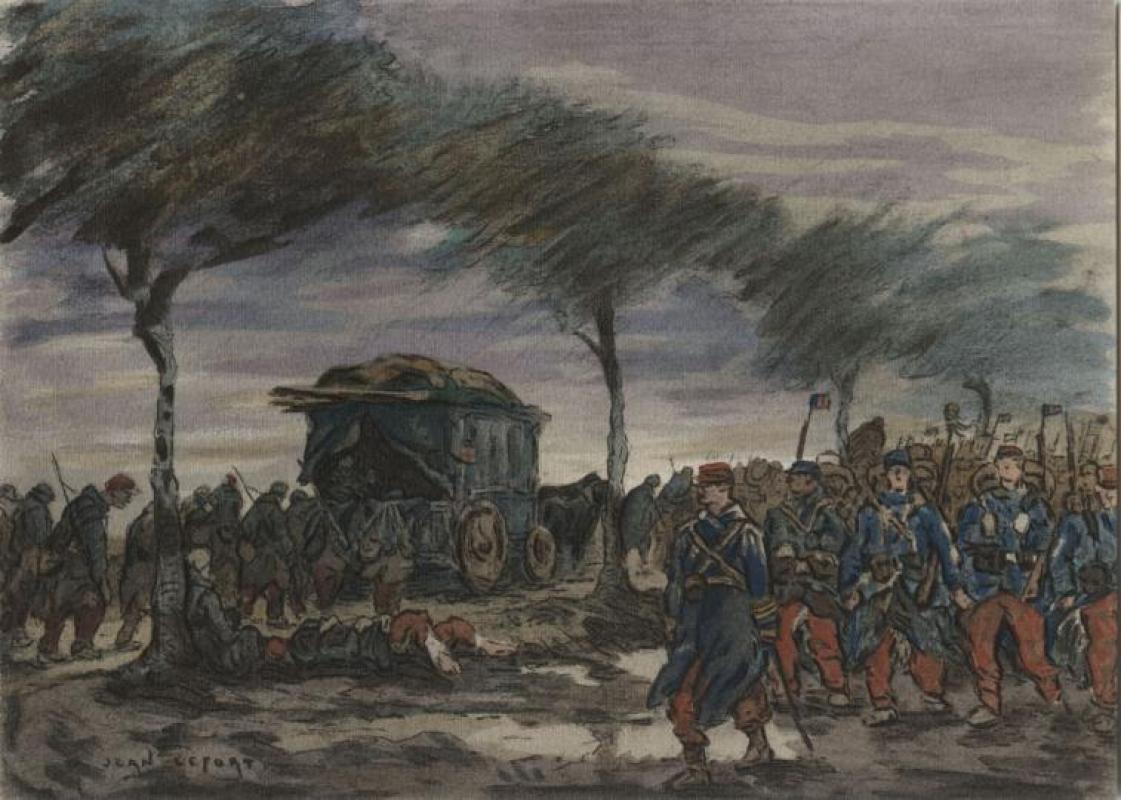 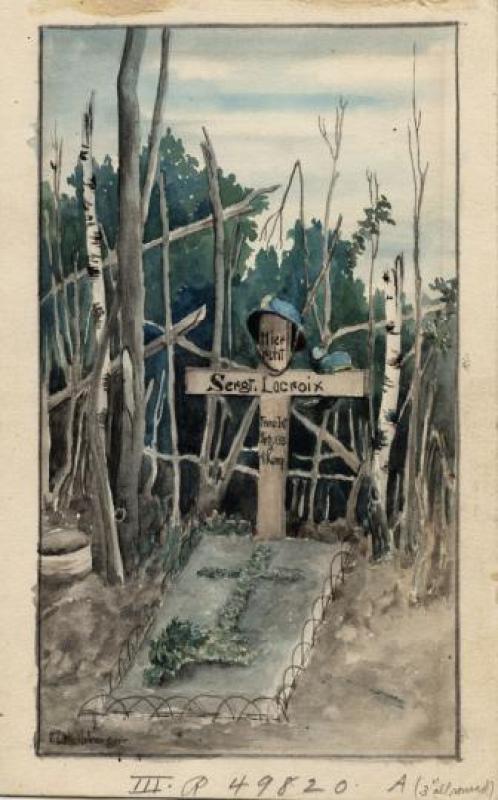