“Remember Me.” “Souvenir de France.” “Mother Dear.” “Merci!” These and countless other sentiments are expressed in the fabric art that came from World War I. Romantic and patriotic scenes were created on silk and cotton and wool felt. Many of the objects were made in direct response to those loved ones going to war from every country. Others were made for commercial purposes to serve the clamor for souvenirs.

Color of Memory: Fabric Art of WWI explores expressions of remembrance through striking and moving works from the Museum and Memorial’s collection.

Regardless of initial purpose, the fabric art became a colorful reminder of how deeply the war affected those at home and away. Among others, needlepoint, silk screen, embroidery, quilting, painting and cross-stitch all served an outlet to artistically express love, fear, loss and memory.

“I am enclosing a handkerchief that I bought for you. It is rather pretty with the French flag and Stars and Stripes together. They sell quite a bunch of them to the boys to send home and there is hardly a town that I have been in that you can’t find hundreds in stores. They have all colors and with different words and such. Some have all the Allied flags worked in the corner.”

One particularly fascinating object is a quilt featuring 89 autographs from noteworthy figures from across the world at the time of the World War I armistice on Nov. 11, 1918. Among the signatories: former U.S. Presidents Theodore Roosevelt and William Howard Taft, U.S. First Lady Edith Wilson, Queen Alexandra of Denmark, Helen Keller, Charlie Chaplin, Orville Wright, 41 state governors and Jeannette Rankin, the first woman to hold federal office in the U.S. as a member of the House of Representatives beginning in 1916. 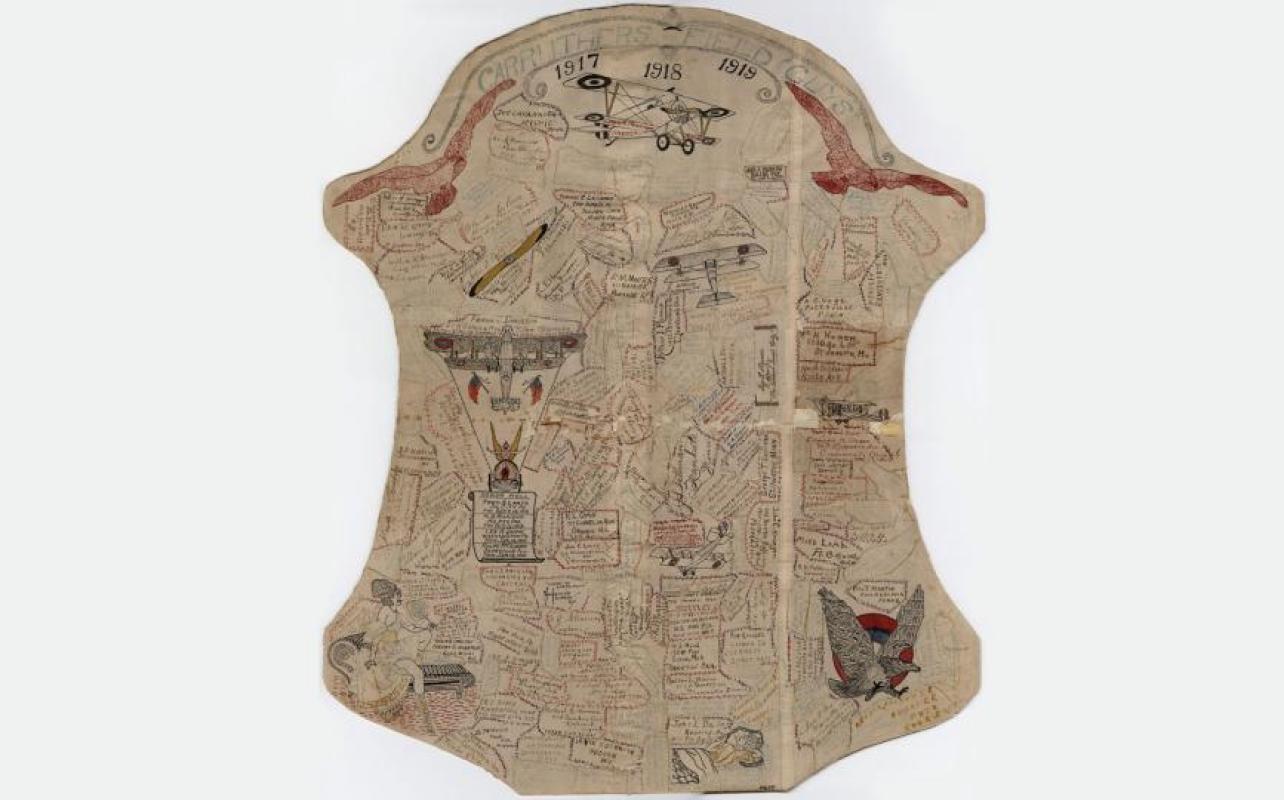 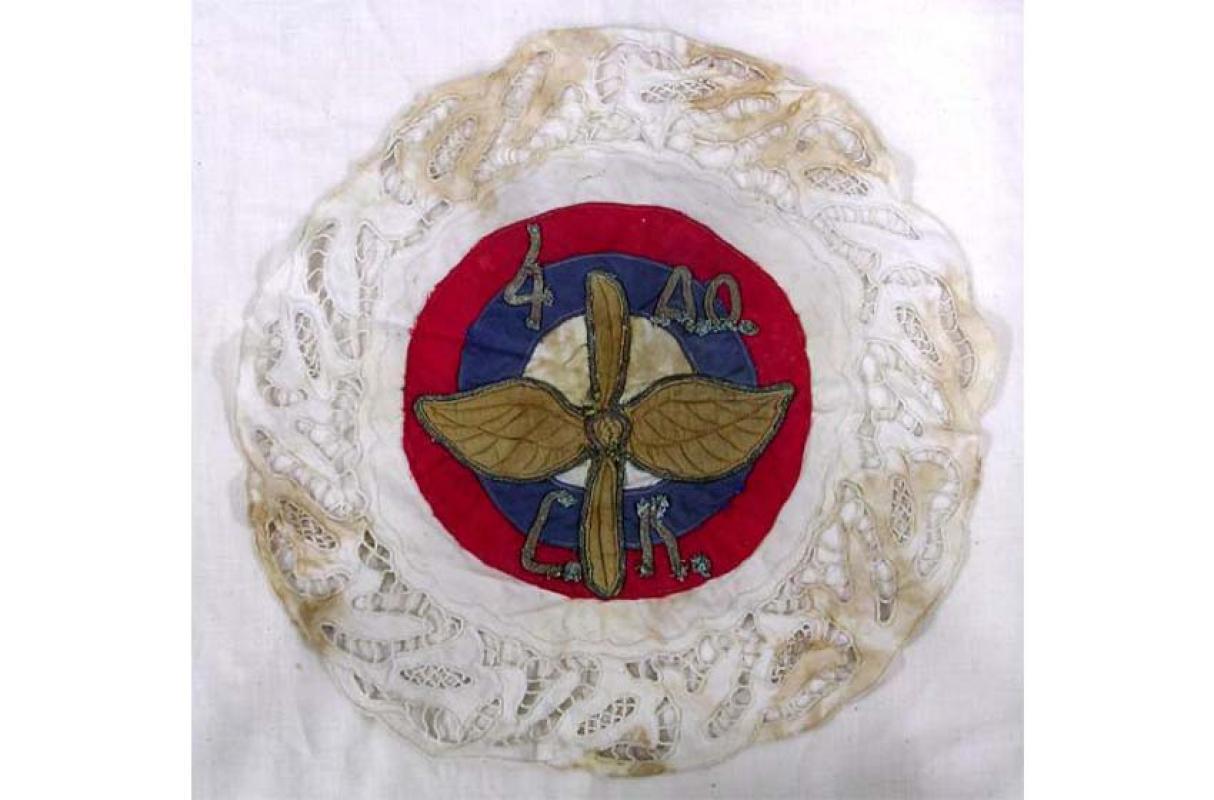 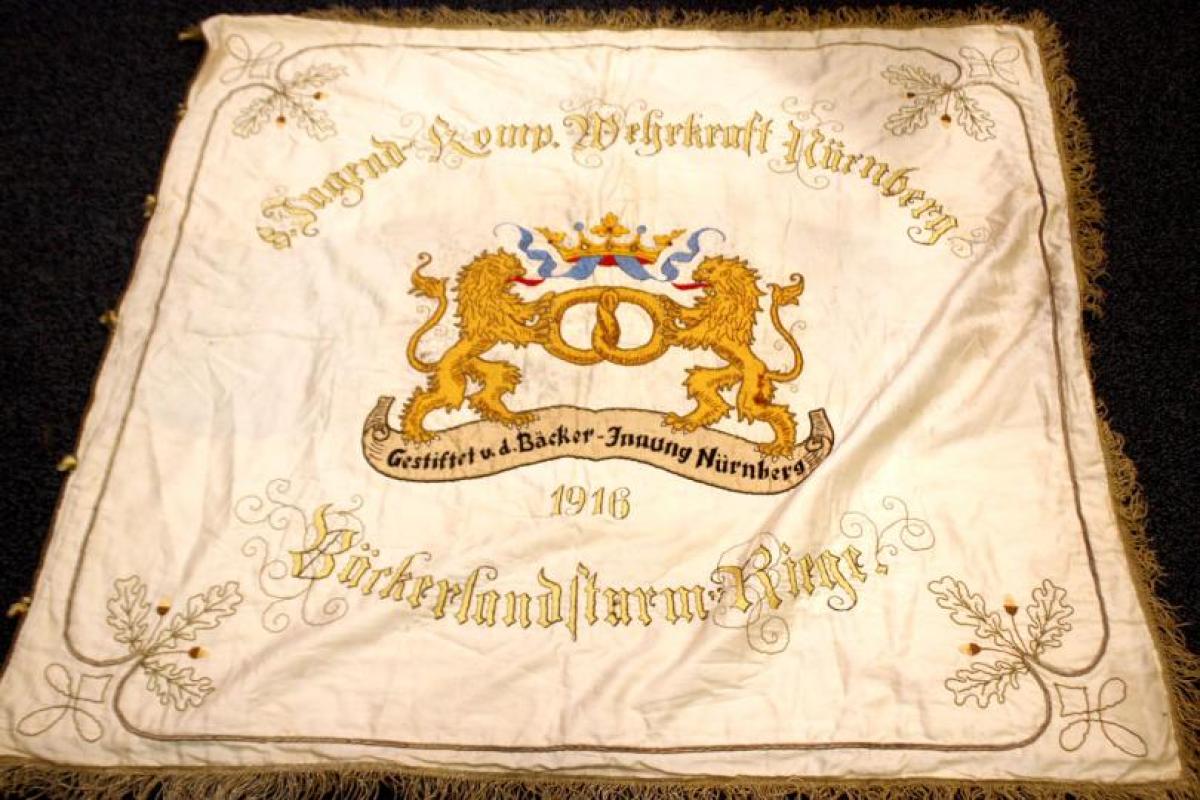 Imperial Bavarian banner for the Bakers’ Union of Nurnberg, Bavaria for their sponsorship of a boys’ para-military organization training for war. 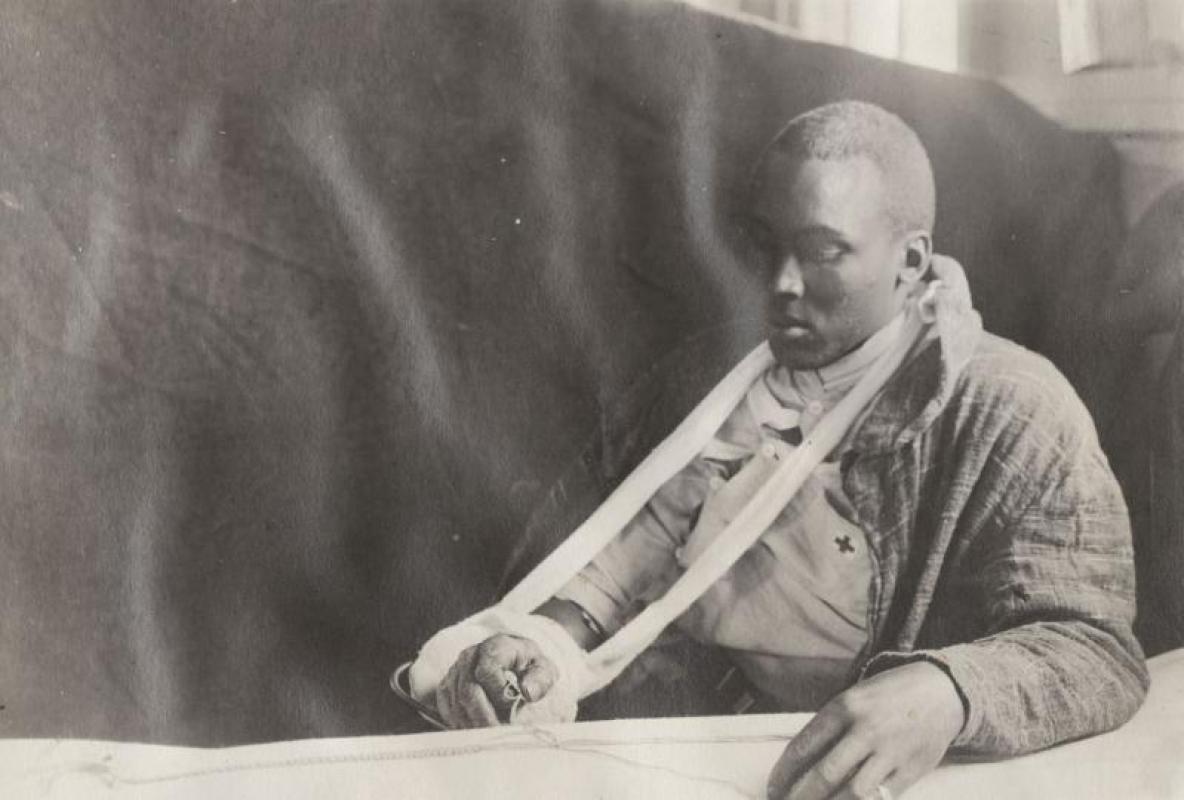 Many soldier-made pieces of fabric art were done as occupational therapy. 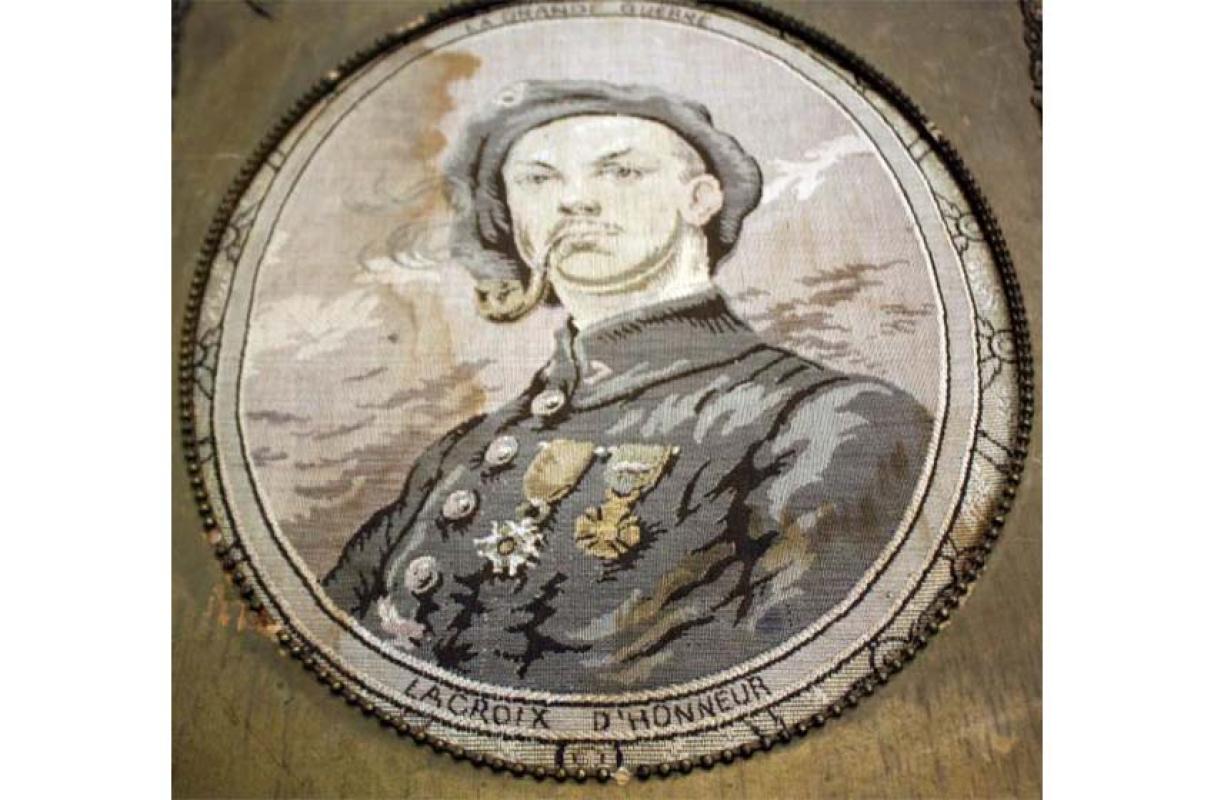 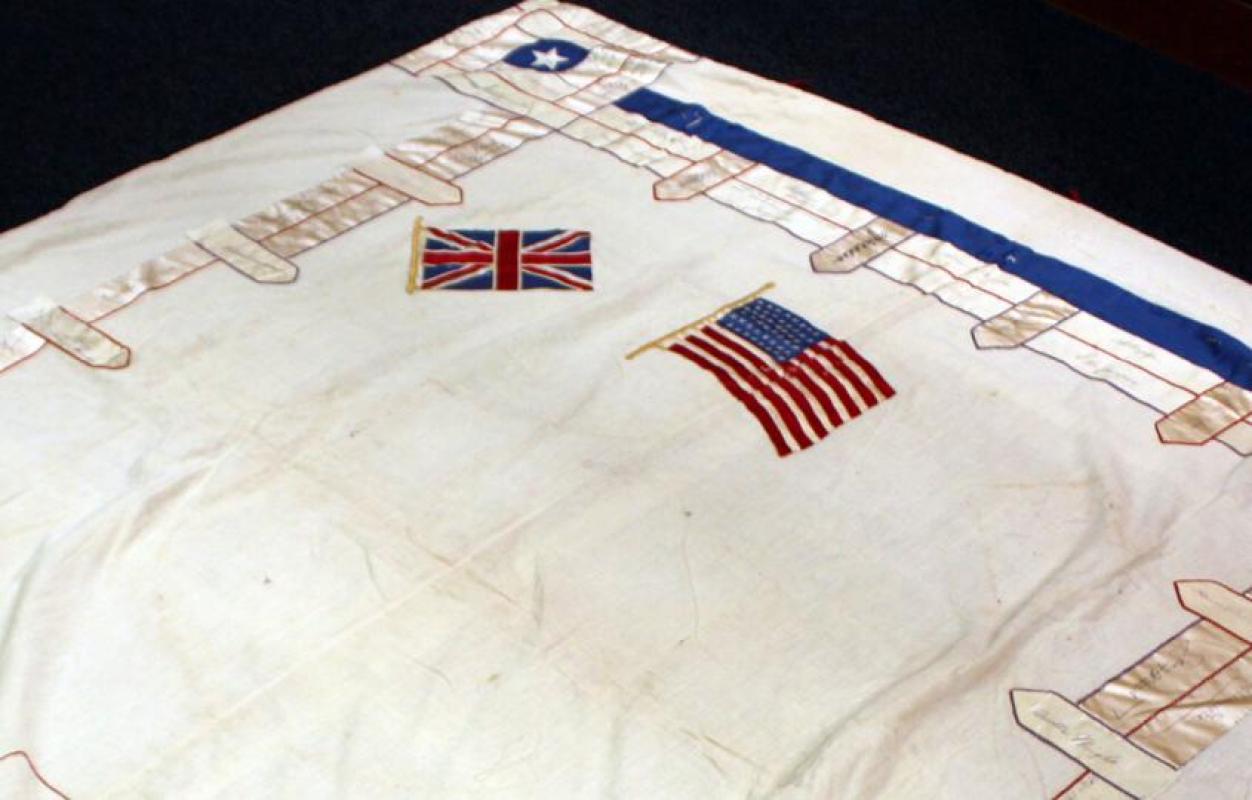 This quilt contains 89 signatures of many prominent people from around the world made at the time of the Armistice, Nov. 11, 1918. According to some, it was made at the instigation of Representative Jeannette Rankin, the only women in Congress. 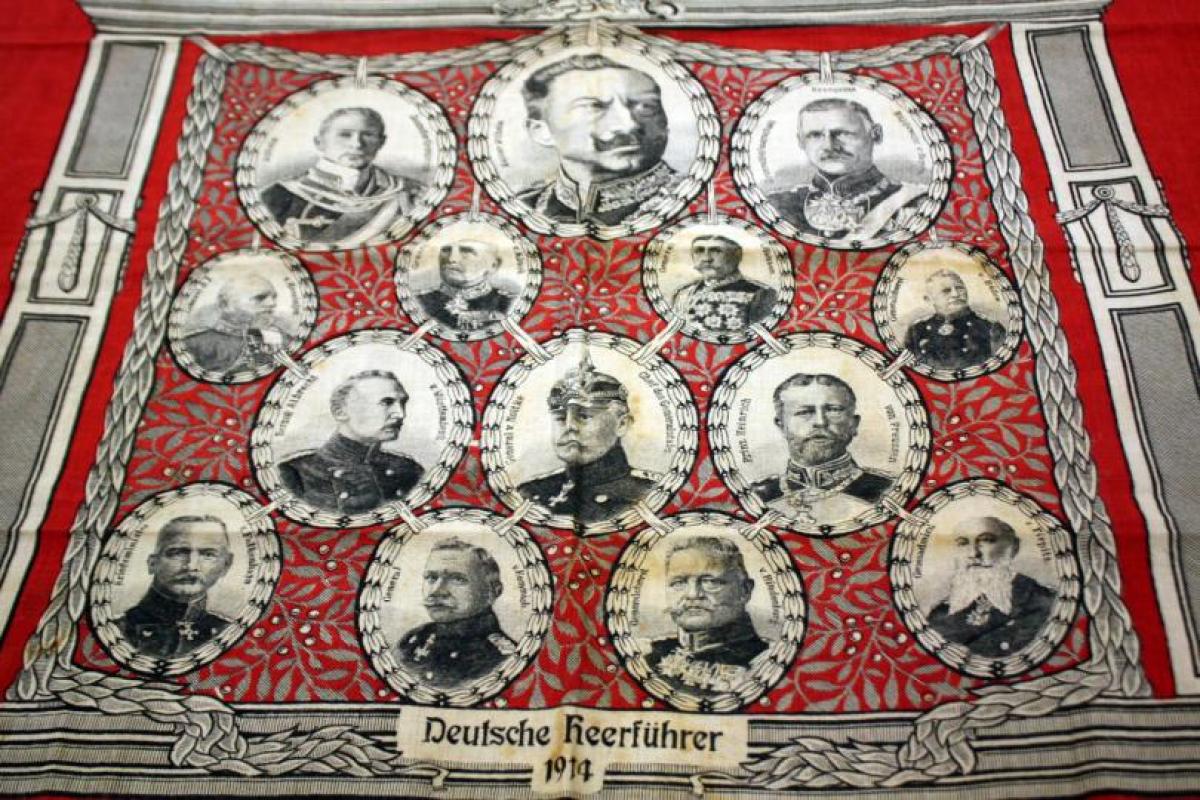 Imperial German silk-screened fabric table cover showing many of the German military leaders in 1914. Such covers were often used on small tables at the entry of a home to show patriotic fervor.