A new donation to the Museum’s archives collection brings to life the fighting spirit of the armed forces and people of the British Empire. The Museum acquired 19 color illustrated cardboard cigarette cards originally from packages of the Wills’s Cigarettes brand. The cards depict various branches of the British armed forces, such as the Royal Artillery, Royal Marines and the Royal Flying Corps and other patriotic, war-related subjects issued by the Imperial Tobacco Company of Great Britain and Ireland. The 19 cards in the donation were part of a series of 24 issued in March and April 1917.

Besides depicting those fighting on land or at sea, the cards include the support services, Transport and Engineers and a support organization, the Red Cross as well as the civilian munitions workers, men and women who provided the war material for the fighting. As a call to arms for men and women throughout the Empire, there is a tribute to India, Canada, South Africa and servicemen from Australia and New Zealand. The role of quickly developing and new military technologies is acknowledged with depictions of warplanes, submarines and tanks.

Wills’s was not the only British cigarette company to include military cards with its product. In the immediate pre-WWI years, Player & Sons, also a brand of the Imperial Tobacco Company, issued a set of cards depicting British regiments from 1650-1914, emphasizing the evolution and diversity of the English later British soldier’s uniform and equipment. 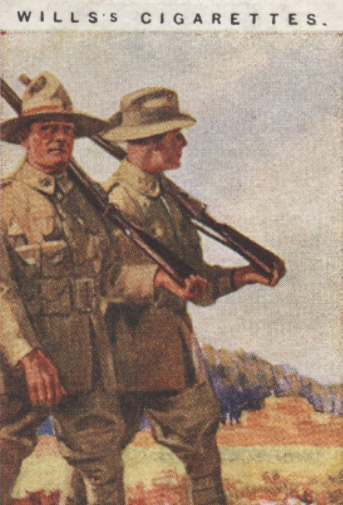