A reunion at the National World War I Museum recently occurred with a donation of fragments from a heroic piece of artwork, the Panthéon de la Guerre. The donation consists of a British section depicting high-ranking army officers and a furled Union Jack flag.

The Panthéon was created in France during World War I and was considered the largest painting in the world, measuring 402-feet long and 45-feet tall. The Panthéon was created as a cyclorama and involved hundreds of artists who collectively painted thousands of military and civilian personages from France and the Allied nations.

The Museum possesses most of the existing portions of the Panthéon, which toured the U.S. after the war. Through a meandering process, the Panthéon eventually was donated in the Liberty Memorial Museum in 1957. Kansas City artist and World War I veteran Daniel MacMorris was commissioned to reconfigure the massive artwork and create a mural that would reside on the north wall of Memory Hall at the Museum. During this process, most of the original canvas was cut and various pieces were given to friends and assistants of MacMorris.

One of these assistants was Joe Gillespie, a Kansas City Art Institute student, whom MacMorris employed to assist with the Site Dedication mural on the West wall of Memory Hall. Gillespie helped MacMorris reconfigure the Panthéon and kept this fragment as a souvenir.

In the 1980s, Gillespie donated the fragment to the Vanburen-Spaeth Library & Museum in Lathrop, Mo. The Lathrop Antique Car, Tractor & Engine Association began oversight of the museum in 2009 and graciously donated the pieces to the National World War I Museum. 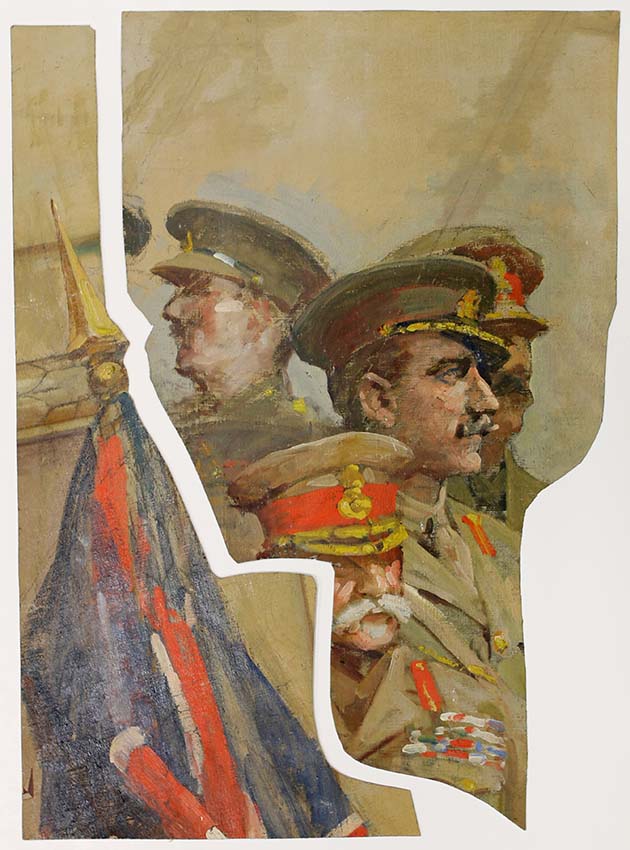