French Mascots - Orphans of the War

The death toll of World War I was horrific with over 9 million combatant deaths. In France, approximately a third of all men between the ages of 18-35 died during the war. That loss is hard to fathom, let alone when one thinks of how those deaths affected the loved ones left behind. Philanthropists saw this suffering in France, especially that of orphaned children, and acted quickly. Numerous organizations formed to help orphaned children, including the American Society for the Relief of French War Orphans and the Fatherless Children of France.

American soldiers also provided aid to children left behind by the war. Through the army newspaper Stars and Stripes and the American Red Cross, they would symbolically adopt French orphans. These children were affectionately known as “mascots” and the soldiers would correspond with them, sending them gifts and financial aid.

The American Red Cross compiled this pamphlet of letters from several such mascots.

From a girl named Marie: “I begin my letter with two affectionate kisses; the first one because you are brave soldiers and very good to France, - the second one to thank you for your generous gift...”

And from a girl named Denise: “I cannot tell you how joyful I feel: when the postman gave me your letter, I could not believe it…you wrote me a long letter all to myself. Mother was amused at my happiness.” 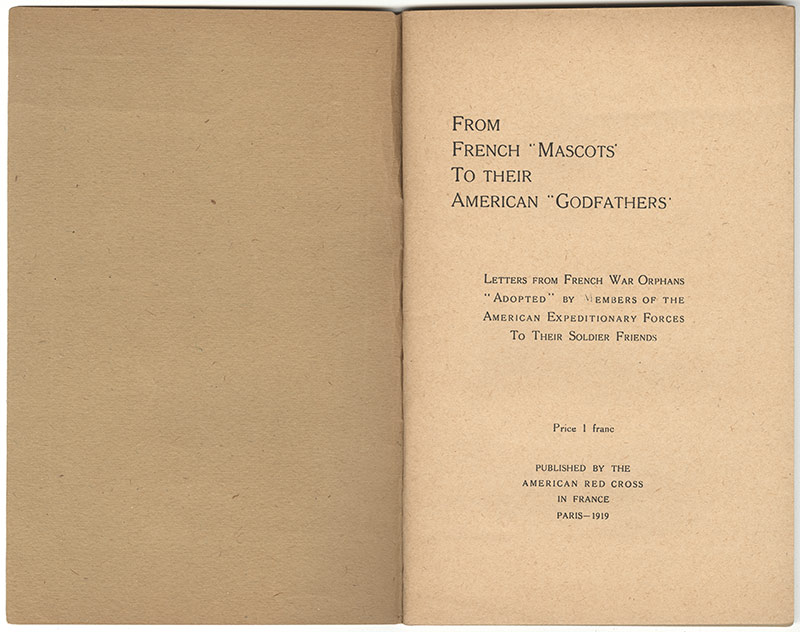 The children wrote of how much the aid helped them pay for necessities, medicine, schooling, as well as trinkets. In return, the soldiers benefited from the satisfaction of helping others. It is also easy to imagine that reading letters filled with childhood wonder served as a good distraction from the life of a soldier.

Learn more in the digital exhibition, The Rise of Giving: American Philanthropy in WWI.